“Josh,” people ask me, “Why do you waste your time on Mark Trail? Why do you wade through week after week of stilted dialogue, nonsensical plots, and freakishly enormous animals?” Well, folks, this is why. When Mark Trail starts punching people, there’s a little warm glow you get in your gut that tells you that everything is right in the world. Sure, it’s only happened twice in the last fifteen months (Mark punches Snake, or maybe Jake, I forget; Mark punches a lecherous, petnapping hillbilly; the installment in which Mark knocks over a trio of bumpkins with a booby-trap is awesome but not a punch per se); but the long waits make the payoffs all the sweeter.

Actual, not-made-up quote in the Wikipedia article on Mark Trail: “His assignments inevitably lead him to discover environmental misdeeds, most often solved with a crushing right cross.” This sort of whimsy almost always gets purged from Wikipedia by killjoy editors, but this sentence cannot be removed because it is demonstrably true.

In this strip, Mark even gives his erstwhile buddy the chance to throw the first punch, which he hilariously botches despite the fact that Mark is standing about six inches away from him. SORRY DAN, MARK DOESN’T GET PUNCHED, HE PUNCHES! Mark’s own steely blow proves to be stronger than even professional-grade spirit gum. It is of course laughable that Dan would skulk around a hotel wearing a cheap wig and fake beard when he could have simply purchased hair dye and grown real facial hair (Dan, did you know that if you stop shaving hair will grow right out of your cheeks?). Another wonderful possibility is that Dan did in fact dye his hair and grow a beard but Mark’s fists are so powerful that they are capable of punching the lies and deceit right off of Dan’s face.

This may be a sensitive subject, but: it appears that when the syndicate said that B.C. would be taken over by “the Hart family” they meant that it would be taken over by “an elaborate computer program that almost, but not quite, understands humor and jokes.” Yes, it looks like Archie’s in for a little competition … from the B.C. Laugh Generating Unit 4000! THERE CAN BE ONLY ONE!

You know, I make fun of Margo a lot on this blog, but it’s only because of my deep affection for her. She’s being so very, very obviously set up for a fall here — note to Margo: usually if a dude is thinking of marrying you, he’d at least let his immediate family know that you aren’t the hired help — that you can’t help but feel bad for her. Still, the coming rage and subsequent bloody revenge will be exquisite to watch.

Possible things running through the horrified mind of Sam the Assistant in panel three:

Also, is Sam actually packing up already-inflated helium balloons to take to their next party? Margo is an awful thrifty party planner. 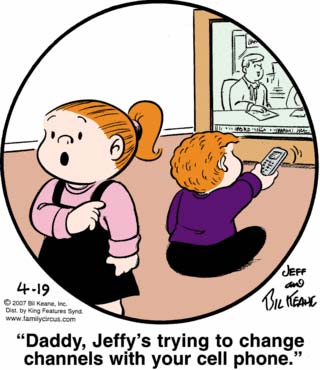 Since grown-up Jeffy is now drawing this thing, I don’t think it’s possible to pack more self-loathing into a single panel than he does here. Perhaps he knows that “Moronic Children = Comedy Gold” but is afraid of lawsuits from his siblings, and so is forced to humiliate his four-year-old self repeatedly in newspapers across the world to earn a living.

God damn, is Cedric going to off these punks execution-style in a dark alley? BADDEST. BUTLER. EVER.

By the way, I can’t conceive of an even remotely plausible chain of events that would end with me holding two actual punk rockers at gunpoint, but if I found myself in that situation, the temptation to say “Do you feel lucky, punk?” would probably be unbearable. 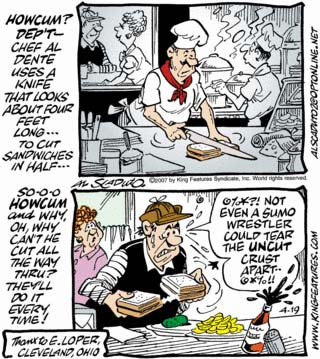 OK, “The Halves Of Restaurant Sandwiches Are Sometimes Not Adequately Separated” is officially the pettiest TDIET gripe in the history of humanity. Still, the narration posits that “Howcum” and “Why, oh, why” might actually be different questions, which is a philosophical conundrum that will haunt me for days.