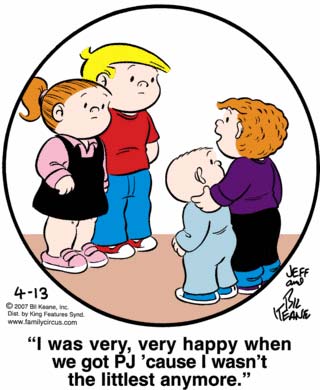 As I noted yesterday, I’m an only child and don’t understand siblings and their ways. Those of you who grew up in big families: did you ever have little get-togethers like this to discuss your feelings about family dynamics when you were under the age of ten? I like how happy Jeffy seems to be to share is feelings of total inadequacies with the rest of the brood, and the palpable shock and disgust on the faces of Billy, Dolly, and even PJ. I’m guessing that immediately after that bit of dialogue, the punching began.

When I tell people I like Mary Worth, they often say things like “Why?” or “Good God, why?” or “Why would anyone read that boring, boring old comic strip?” Days like today prove that “boring” is a word that should never be used in regards to this feature. This is a finely detailed depiction of psychological brinksmanship! Thrill as Mary completely bypasses the normal polite rules of human interaction, and forces Vera to either agree to give up her precious privacy or explicitly spurn an old lady! The fact that the strip ends in mid-sentence only adds to the excitement. Will Vera’s conclusion be “…of course I’ll have dinner with you! What should I bring?” or “…why don’t you eat with THE REST OF THE DEMONS IN HELL, YOU OLD HAG?” How will I be able to hold out until tomorrow?

I’m really, really upset that we didn’t actually get to see Katy’s birthday party — not because I’m a sicko who likes to watch the birthday parties of sixteen-year-old cancer patients, but because I have long suspected that Margo is a total incompetent whatever attention-grabbing scheme she’s attempting to use as a vehicle for meeting a rich man at any given moment. Some years ago we saw her completely screw up doing publicity for one of Blaze’s plays because she got wind of some piece of ass; I fully expected her party planning career to have gone down in flames by now as well. While the streamers, balloons, and hand-painted sign that reads HAPD BIRT don’t exactly scream “$100 an hour party planner”, who knows what sort of “awesome” activities we missed. Maybe Usher was there, or strippers, or Usher stripping.

True story: last year on my birthday my wife and I spent a relaxing day together and by mid-afternoon I was pretty pleased with how the day went. But then were driving back from the pool we belong to through a kind of ritzy neighborhood, and some kids were having a birthday party in the yard of this huge house, and they were unloading a goddamned llama out of the back of a llama truck, and my day felt a little less special. What I’m trying to say, Margo, is where’s the llama? I know it’s hard to get one into a Manhattan apartment, but what Katy wants, Katy gets. 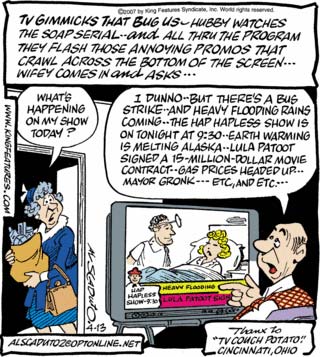 Like a magpie fixated on a shiny piece of tinfoil, I can’t get a single phrase from Hubby’s rambling diatribe out of my mind: “Earth warming.” At first I thought it was an attempt to use up slightly less word balloon real estate than the more conventional “global warming,” but if that were the case I think the thing to do would have been to lose one or more of the “etc”s. So I’m thinking it’s one of two things:

Also, I first read Hubby’s initial news item as pertaining to a “bug strike” and charmingly imagined a group of ants and beetles walking in a circle carrying tiny signs that read “PLEASE DO NOT STEP ON US”.

I can’t decide if the message of today’s Slylock Fox is “Cab rides with nearsighted drivers are a horrifying nightmare” or “Sticking your head out of a moving car is ill-advised, no matter how much fun your dog seems to have doing it.” But the multiple images give the whole thing a pleasing pop art quality.