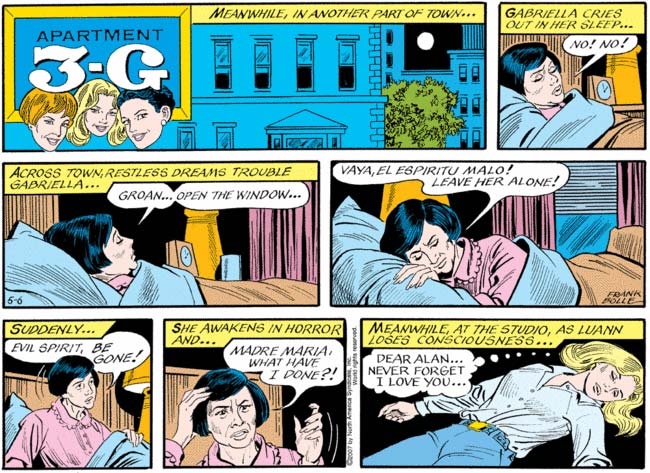 Yesterday, we saw Lu Ann’s oxygen-starved brain conjuring up images of everyone who had singularly failed to rescue her from her sinister spectral captivity, leaving open the question: who will save her, since actually killing her off would be unthinkable? Today, we get the surprising answer: It’s Margo’s comical immigrant mother, Gabriella! There’s a certain justice to this; she’s the one who essentially told Lu Ann that ghosts were awesome in the first place, so now she’s going to have to knock down that door in her bathrobe, babbling in fake-o Spanish and wielding a fistful of protective charms from the Old Country to save our dim blonde heroine. Remember: do not rely on WASPs to fight against the forces of the Other World. Only ethnics can do so, and the Professor has become far too assimilated to help. 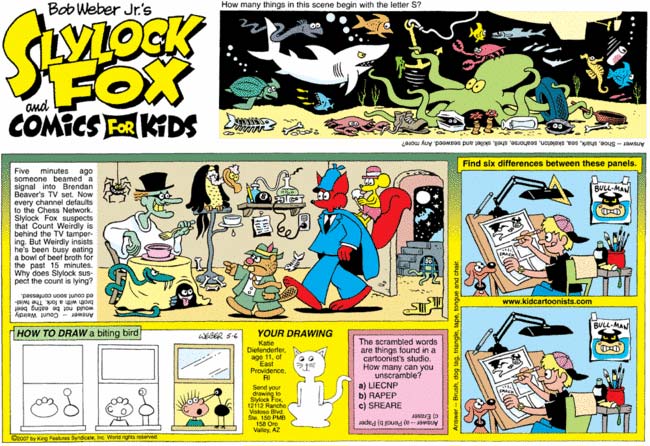 Ah ha! Our oft-harassed beaver, previously seen being victimized by loose women in discos and harassed by humans in airports, at last has an alliterative name of his own: Brendan! He’s also upgraded his wardrobe, sporting a pimpalicious chartreuse suit with matching befeathered fedora. And of course, he’s as hilariously outraged and quick to tattle to Slylock as ever.

By the way, I know it’s almost impossible to read the solution in this graphic, but Count Weirdly is about to be hauled off for the entirely victimless crime of jamming Brendan’s TV so that it only receives the Chess Channel, and the only evidence of wrongdoing is that he’s eating his broth with a fork. Does a little eccentric behavior make you automatically guilty in Slylock Fox’s police state? The man’s name is “Weirdly,” for God’s sake; you can’t expect him to consume soup like a normal person.

I do like the vicious attack stork in the “How To Draw” feature at the bottom of the page. As for the six differences, the most prominent one that I could find is that the kid in the top panel will eventually go on to a successful career as an illustrator and graphic novelist, while the other boy will take “practical” courses in school and go on to a soul-sapping life of quiet desperation as he toils away in a job he despises. 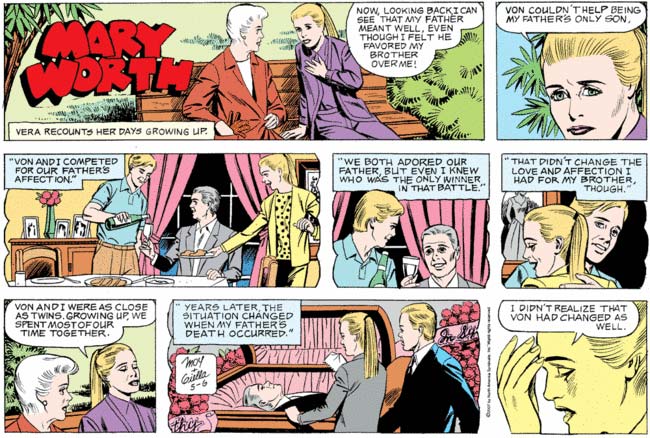 If panel three demonstrates a typical battle in the war for the elder Sheilds’ love, I think Vera’s a bit to quick to blame sexism for her low state. Note that her brother is pouring the old man a tasty flute of the finest champagne, while Vera is thrusting a plate bearing two lumpy, shapeless brown things at him. Advantage: Von.

The grammatical set-up Vera uses in panel seven (“when my father’s death occurred”) is quite revealing. Usually people do that sort of thing when they’re trying to deny their own agency in the matter. She’s not explicitly lying, but she knows she won’t keep Mary on her side if she says “Years later, the situation changed when I bludgeoned my father to death.”

Oh, Les, you cut-up! There’s nothing that helps your pedagogical strategies like a little public humiliation. We’ll all have a good laugh, at least until the inevitable HIPAA lawsuit.

Desperate to extend a moment of happy camaraderie with his son but unfamiliar with the concept of the fist bump, in panel five Walt crosses a line that can never be uncrossed.