“I got a haircut … from the aliens that abducted me! I don’t think they understand the concept of ‘haircuts,’ actually, but it was free and all.”

I successfully called this one yesterday, not that being able to predict the twists and turns of this simultaneously obvious and moronic storyline ought to garner me anything but shame. Pissy little whiny baby Brynna will still be mad, since Lisa Wyche seems to have scored a wig that looks more or less like her actual hair rather than some cancer turban. This battle won’t end until the upcoming unfortunate mutual decapitation incident. 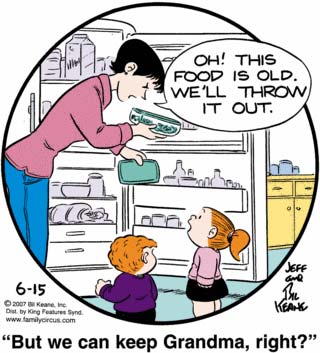 “Of course, we made Grandma into jerky! She’ll stay good for months.”

There’s something unutterably creepy about panel three, in which Mark is gazing lovingly at the blinded Sam while sexily straddling a chair, and it’s not just because I saw Crazy Love the other night, either. Meanwhile, as usual, the forces of good prove to be less dumb than the forces of evil by only a miniscule amount. Despite the fact the Evil County Commissioners are open about their quest to get a new airport built, Mark will need to go back to the scene of the crime and find some revealing eyehook before his feeble synapses start to fire and the punching begins.

Ah, the old “my father never loved me” routine, eh? It’s a bold move, but when you’re trying to bed your lookalike stepmother when they haven’t even fished your father’s cold corpse out of the North Atlantic yet, you’ve got to pull out the big guns.

So pluggers watch movies to see the non-human mammalian characters? This may be the most reasonable and logical Pluggers ever.