Ha ha! Crankshaft’s prostate is grotesquely swollen, making every waking moment a torture for him! Ha ha! Oh, the hilarity!

Adding to the funny, of course, is the revelation that the dickery that the ’Shaft displays pretty much every day is part of a majestic chain of misanthropy that spans the generations. At least Crankshaft Senior has some actual annoyance to overreact to, since presumably one didn’t send children off to stadium restrooms on their own, even in the sepia-toned days of yore. Since our hero does not require assistance to toddle off to the john in the present day, I guess Crankshaft III just wants to make him feel bad about being old and decrepit.

Actually, now that I think about it, I guess that’s supposed to be Crankshaft’s son-in-law, not son, since he’s the one with the unspeakably hateful Ukrainian mother. Pretty much everyone in this strip is a loathsome human being, is what I’m saying.

(Hey, isn’t the ’Shaft supposed to be a WWII vet? If he’s 70, that would have him going through his basic training at the ripe old age of 7. Of course, it’s possible that the ’Shaft-in-law just uses “70” as his synonym for “I no longer bother to keep track of how old you actually are, fossil.”)

UPDATE: As several of you who are clearly smarter than I am pointed out, the little tot in the sepia-toned first panel is a girl child, which means that the horrible, horrible adult human being next to her is the ’Shaft himself. Let this be a lesson to you about not altering the facts to fit your grandiose “cycle of hate” thesis. Presumably said pigtailed tot is in fact the wife of the non-’Shaft dude in panel two, and thus he’s dishing out a little payback on her behalf.

“Yes, Nora, in my experience, there’s nothing an impoverished Oriental peasant respects more than a white man in an electric blue suit waving hard currency around and offering him the chance to choose between selling centuries-old pieces of his cultural patrimony and starving to death. The little buggers adore me.”

Something is seriously awry with Nora’s shirt in panel three. “God damn it, if I show him my left boob, will he stop nattering on about my dead husband and the filthy foreigners he forsook me for?” 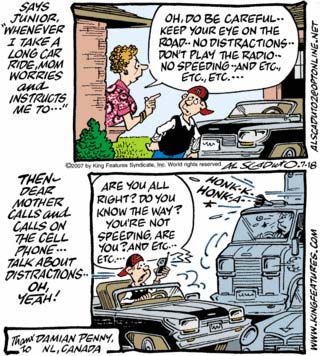 Curmudgeon dominance of TDIET proceeds apace: today’s entry is from faithful reader Damian Penny, who sent this entry straight out of m************ Newfoundland, before he up and moved to Halifax. It may be the first TDIET to end in a twisted pile of steel and flesh — but not the last, I’m hoping.

HONK-A is an amusing but not outrageous variation, but I dare you to find a horn that can produce a sound like HONK-K. On the other hand, I really like the way the trucker’s wordless curse symbols are all tiny-like and entirely contained within the cab.

You get the feeling that Drew starts a lot of his sentences with “I love talking about my”.

So, long story short, that’s why everyone at Splash Land died of cholera.

Finally, I offer the latest in an extremely occasional series of potential LiveJournal icons from the comics, this one from today’s Crock: 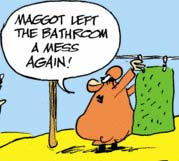 It should correspond to “Mood: Incontinent”.