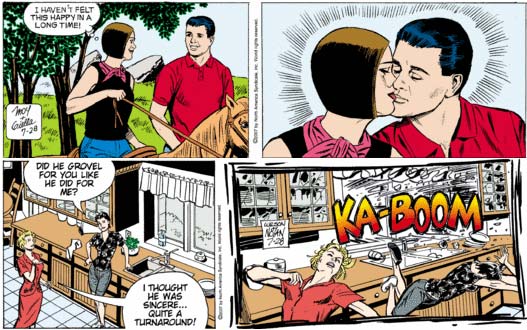 Maternal visit or no, I certainly could not let these two explosive comics from Saturday go unremarked. I’d urge you to try to reproduce the bizarre angles of Drew and Dawn’s approach in panel two at home, but you might then be tempted to photograph it and send me a picture, the prospect of which makes me distinctly uncomfortable. I’m pretty sure the lines of radiance represent the aura experienced by epileptics just before a seizure, because that’s the only reasonably explanation for the awkward poses and facial expressions of otherworldly detachment from reality.

Meanwhile, in Rex Morgan, M.D., stuff (and here I mean “stuff” U English sense to mean woolen fabric, specifically the woolen fabric in the very U Hugh’s suit) blows up. Even more exciting than that, though, is seeing June say, “Did he grovel for you like he did for me?” That very well could have triggered the explosion — the explosion of sexiness. 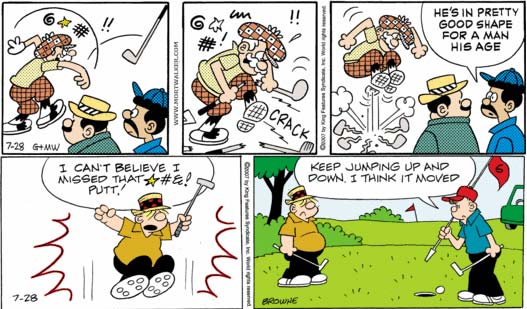 Meanwhile, although I’m usually left cold by golf jokes (and WE GET IT CARTOONISTS YOU’D RATHER BE GOLFING THAN DRAWING FUNNY PICTURES) and Beetle Bailey generally, I have to admit that Saturday’s Beetle Bailey golf joke actually made me laugh aloud. I do wonder why Walker-Browne Amalgamated Humor Industries LLC doesn’t have team meetings once a week to prevent this kind of overlap, though. 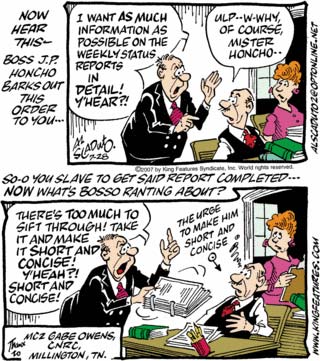 And once again TDIET is Curmudgeon-inspired! Gabe Owens is in fact faithful reader Gabe. Since Gabe is in the Navy, this cartoon could have featured some epically outdated uniforms and insignia, possible from World War I, but I guess that’s Beetle Bailey territory; when you’re in a TDIET, you toil away in a generic Eisenhower-era office and you like it, buddy. Gabe has used his real name (and rank? I thought MC2 was some variation on “Master Chief”, but I couldn’t find any evidence to that effect online; maybe it’s his rap name?), so he’d better hope that having “The Urge” isn’t a court-martialable offense.