OH YEAH, MARK TRAIL BEATING THE CRAP OUTTA SOME GUY! That’s the best way to start your weekend right there. I love the way Buzzard is toppling over in panel one, less like an actual human being who just got socked in the jaw and more like the huge statue of a jowly, overalled dictator being pulled down in the wake of some kind of anti-hillbilly revolution.

Since he has no facial hair to punch off, we have to settle for the image of Buzzard’s hat flying off in the opposite direction of his head as he reels from Mark’s punishing blow. Some of you seem to believe that Mark’s punched Buzzard’s overalls off as well, but in panel two they seem to still be securely fastened. No, I think what’s happening in panel three, as Buzzard tries to distract us with his legal jibber-jabber, is that the portly rustic is actually taking off his clothes in preparation for the next phase of the battle. Tomorrow’s going to be awesome.

I surprised even myself yesterday by glossing over Margo’s blatant come-on, but today’s sordid aftermath is in the final analysis really more my style. Eric and Margo, ever the romantics, apparently did it fully clothed out on the balcony, and Eric, ever the gentleman, passed out almost immediately afterwards. If Margo were capable of feeling, she might be upset, but as it is the situation offers a perfect opportunity to root through Eric’s stuff. These two crazy kids are made for each other!

I have to disagree with those commentors who are saying that Lisa is calling Darrin a mistake to his face. She’s saying that, if you don’t want to have a baby, it’s a mistake to have sex without using birth control — which is true, damn it. And Jessica’s comeback implies that the current generation of young Winkerbeaners were smart enough to know that. So, yay for the promotion of safe sex, even if only obliquely hinted at! I give you kudos on this point, Funky Winkerbean.

Darrin and Jessica will still die of cancer before they’re 30, of course.

Gil Thorp continues to be the gift that keeps on giving, as Coach Kaz, P.I., works his way through the has-beens and burnouts that make up Gail Martin’s touring band. You can tell that Kaz has the great people sense that all good detectives need, as he openly condescends to one of the guys he’s going to be on tour with, though Cliff “Second Summer In A Row That Gil Thorp Has Featured A Benjamin Franklin Lookalike” Wrobek is probably too high to notice. I almost hope that Gail cancels her concert tour out of fear, because the image of a dazed and confused Cliff trying to sell insurance while waving his drumsticks around is just too delicious.

After the United States adopted a single-payer health care system, most historians believed that the turning point in the debate came when the Wizard of Id joined the movement. 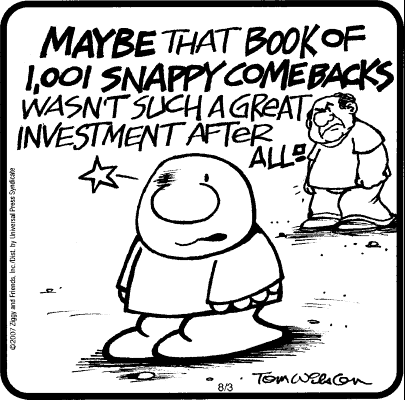 Ha ha! Ziggy mouthed off and got punched in the face! Little dude just can’t win! Look at the bruising! Ha!