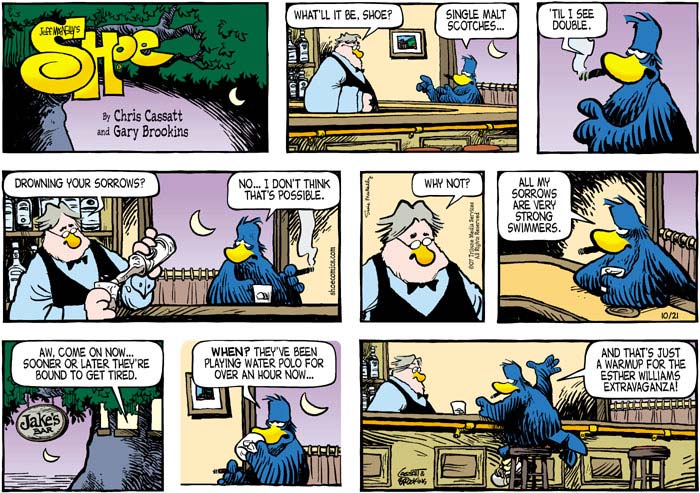 As the funnies have repeatedly taught us, there’s nothing better for tickling your funny bone as you read the paper over a leisurely Sunday breakfast like a lonely, depressed bird trying to deal with his empty life by drinking alone. Usually it’s the Perfesser whose ruined, emotionally dead existence gets put on display for our amusement, but today’s it’s Shoe, because, hey, why the hell not. He wants to drink whiskey until his vision is impaired! His psychic wounds are so deep that no amount of substance use can put an end to the pain! Normally this is the stuff of depressing black-and-white European cinema, but there’s a cute pun here and a reference to a classic movie star that 75 percent of the strip’s readers have never heard of — plus, as mentioned, the poor depressed alcoholic and his enabler are birds — so in this case it’s a God-damned laugh riot.

I have to admit that I found this strip both sweet in and of itself and a decent way to frame the Great Funky Winkerbean Leap Forward. However, I do wonder exactly what dialog preceded “…and so that’s what happens to people when they die.” If this were the Family Circus, there probably would have been some treacly description of God taking you up to a beautiful shiny white paradise where you get to look down from above on a cloud, but in this strip I’m guessing Les provided a detailed description of the typical sequence of organ failure, followed by a chemistry-heavy discourse on the decay of organic matter. Similarly, in a cutesier strip, little Summer’s heartwarming gesture in the first panel of the second row would indicate that Lisa will live forever in her heart, but it’s more likely that Les brought her to Central Park so she could dig up some of her ashes and eat them. 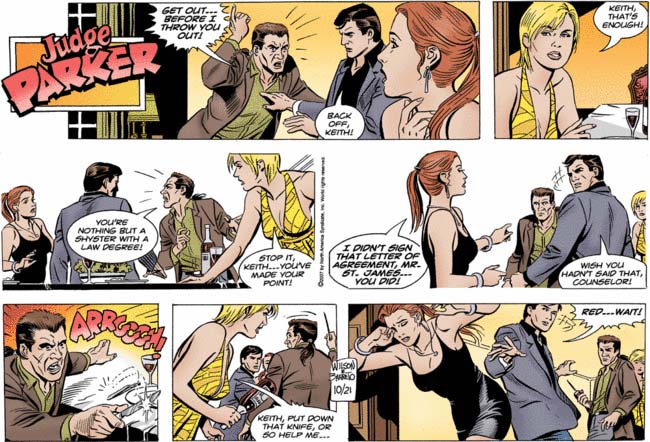 Yeah, Red, wait! Stick around! I can’t imagine why you’d want to leave. Is it just because one of your hosts got drunk and tried to shank you with a steak knife because you pointed out that he got himself into his own mess? Nice little egging on there from Sam — “Wish you hadn’t sad that, counselor! Don’t make Mullety Flatop angry — you wouldn’t like him when he’s angry!” Why, if you storm out now, you won’t get to see Trudi break that wine bottle on the edge of the table and go after her knife-wielding brother. Should be a hoot!

Oh, and note to Keith: Don’t all shysters have law degrees by definition? Also, I know it’s your house and all, but you really shouldn’t try to stab people with the flatware. 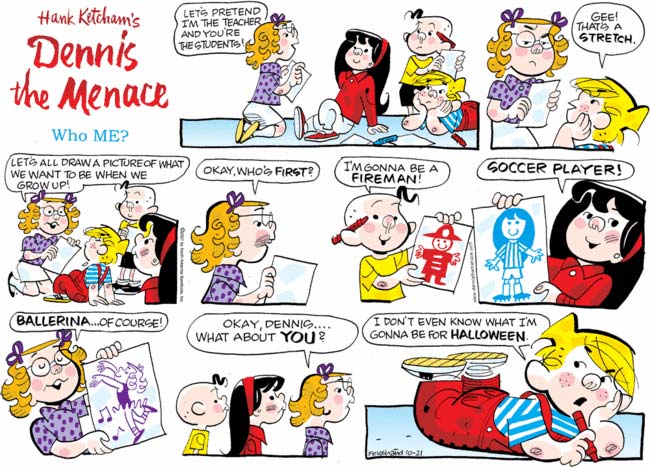 Ha ha, look at Dennis’s pissy face in the last panel! I know what he’s going to be when grows up: sullen and unemployed!