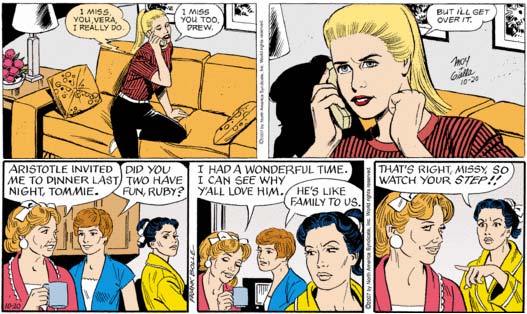 OH SNAP DR. DREW GOT SERVED AGAIN BY HIS OTHER GIRLFRIEND! See, this is the advantage of dating an older woman: instead of violently lashing out when she’s wronged, she just slips some stilleto-sharp barb right between your emotional ribs. Drew, Vera’s tough because she’s had to endure things you can’t even imagine. Did you know she used to be rich and now she’s not? And then she had to get a job? Clearly she’s not to be trifled with.

On an unrelated note, I’m a little unsettled by Vera’s throw pillows being the exact same awful orange color as he sofa. They’re supposed to complement the piece of furniture, not blend in as if they’re hiding from predators.

The contrast between Vera’s steely, several-weeks-post-breakup resolve and Margo’s floundering hostility is instructive. Obviously our still conspicuously non-engaged gal Magee is not holding things together as well as she’d like us to believe, and Ruby’s little smile shows she knows who has the upper hand in this confrontation. Still, now that Margo has arbitrarily decided that Ruby is her enemy, she can’t back down, so this should be a gloriously amusing conflict. Perhaps she’ll lasso a heartbroken Gina into some sort of Axis of Insensitive Brunette Evil.

Faithful reader Virginia deserves credit for noting the resemblance between this obviously bad news dude (torn-off sleeves? torn-off sleeves?) and Mary Worth’s legendary Tommy the Tweaker. Whether or not he’s an incompetent meth dealer, I’m going to guess that ponytail guy is going to lead poor, vulnerable, prone-to-violence Cully down the wrong path (I mean, torn-off sleeves? Seriously?). In the end, we’ll learn a valuable lesson, which will either be that youthful offenders need to be integrated back into society as quickly as possible to avoid recidivism, or that there is no hope whatsoever for youthful offenders and they need to be put into a dark hole from which they’ll never be able to get out.

I appreciate Cully’s perfectly triangular sandwich in panel one. Does he get his lunch from OCD Deli?

I don’t want to cast aspersions on the intelligence level of the average American, but I’m willing to bet that more people in this country know the name of Britney Spears’ ex-husband than the name of the current governor of the state they live in; therefore, any town in which Dick Tracy and the governor are “celebrities” has got to be either the best educated municipality in America or the most boring (probably both, actually). Still, the managers of this bizarre charity event are right to think that getting the trigger-happy Detective Tracy involved will attract media attention. The banner headline in the local paper the next morning will no doubt read something like “DETECTIVE MISTAKES GOVERNOR FOR GHOST, SHOOTS HIM 148 TIMES”.