Wow, most comics characters at least make some sort of pretense of respecting religion and some vague concept of a Supreme Being, but Ed Crankshaft has officially added to his Most Cantankerous Comics Character Ever cred by sneering at the notion that any sort of just deity might respond to our pleas. Since he lives in a universe shared with Funky Winkerbean, in which characters are visited by afflictions both arbitrary (cancer, alcoholism) and ironic (hearing loss, limb loss) at a much higher than average rate, he’s obviously decided that begging his Creator for some droplet of mercy will only intensify the punishment to come. Still, the fact that he’s doling out his atheistic opinions to his fellow oldster, reading a book about prayer in a doctor’s waiting room and desperately trying to hold on to some thread of possibility for continued survival, reinforces the ’Shaft’s hardcore crank status.

Of course, Crankshaft’s religious impulses may have been cynically flattened by cartoons like this. Remember, kids, if your congregation is large and wealthy enough to build an enormous, Medieval Times-inspired faux-castle for its church, its members must be one step closer to salvation! It just stands to reason!

Oh man, oh man, I am so looking forward to Lu Ann’s Adventures In Unrealistically Specific Memory Loss! Does she even remember that she’s an artist? Doesn’t she wonder why she’s an elementary school art teacher if not? Wait a minute — did she somehow manage to hold on to her art teacher job despite the fact the she presumably didn’t come to work in the weeks and weeks she spent barricaded in her carbon monoxide-filled art studio? Does she even remember what a “job” is? Is that why in the first panel she looks so baffled when Alan claims to have one?

Speaking of carbon monoxide poisoning — did anyone ever have words with the kindly studio landlord about the incredibly unsafe status of his building? I’m not up on New York landlord-tenant law, but surely the right to not be suffocated is at least implied in most commercial leases, yes?

Good lord, I was really hoping that we wouldn’t have to look at the hideous visage of Dick’s commie nemesis anymore. But then I saw his weird, weird ass. Be careful what you wish for, I guess. 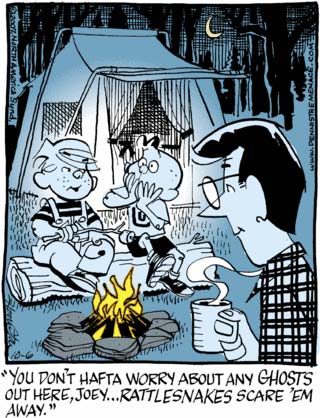 Dennis reducing his only friend to a urine-soaked lump of fear is pretty much par for the course for this strip, but I’m kind of intrigued by Henry’s little smile at the psychological hold his son has over his playmate. Presumably the Mitchells will spend this camping trip gaslighting Joey until he’s only fit for a locked mental ward. The only question: is there some financial gain spurring their cruelty on, or is it mere sadistic sport?

I haven’t been discussing Mark Trail much because it’s been so painfully moronic, but here’s the gist: Shirley the duck and her chicks, who have been saved first from bulldozers and then from (no, really) rain by Homer the construction foreman, Mark Trail, and some other chumps I refuse to go into the archive to identify, are now about to be eaten by this rather awesomely rendered fish. What lesson will we learn in the end?