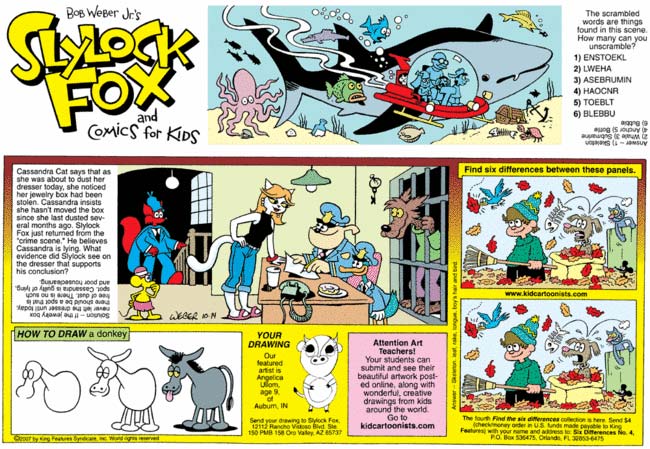 Hey, everybody! Cassandra’s back! She’s dressed sexily but still fairly demurely in her pedal-pushers and sensible sandals (though of course you can buy a t-shirt with her in a much groovier get-up). Today’s Cassie adventure reveals only the depth of Slylock’s total obsession with her. The poor cat’s barely gotten to the point of filling out her police report paperwork and the Fox has already broken and entered into her place, no doubt predisposed to ignore her plea to help. He probably moved the dust around just to spite her. And the “bad housekeeping” jibe is just cruel. She’s a sexy cat about town with a full social calendar, detective. Just because you have tons of free time to dust your place while fantasizing about gorgeous she-felines that no jail can hold doesn’t mean her life is snoresville.

Anyway, I hope that kids read this and learn how to perpetrate a successful insurance fraud. I also hope Max is enjoying his time staring at Cassandra’s ass. 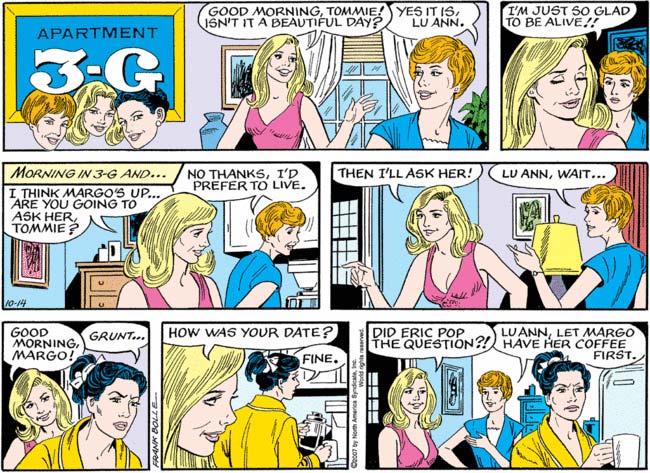 Oh my God, Tommie made a funny! Mark your calendars, everybody!

I’m pretty much in love with everything about this strip, even though exactly nothing happens in it. I love Tommie’s little joke, I love the fact that Lu Ann and Tommie are fully dressed while Margo is just crawling out of bed (it’s probably 3:30 in the afternoon), I love the forceful period, a tiny black singularity of disgruntlement, at the end of Margo’s “fine” in panel six. I also love how damn happy Lu Ann is. She apparently is no longer concerned about her brain damage and resulting memory loss, although it’s possible she’s already forgotten about it. Based on her outfit, she’s also forgotten that she’s a big old prude as well. 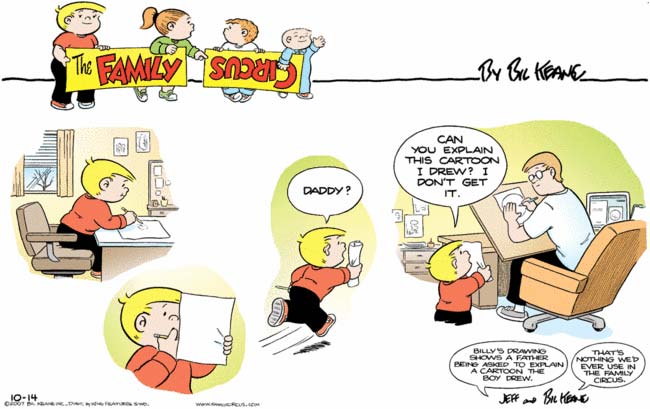 The self-referential causality loop that this strip is locked into is already a bit of a mind-bender, but what really pushes it over the edge is the little signature conversation at the bottom right. Daddy and Jeffy are having a nice little condescending put-down of moronic big brother Billy (who’s based on respected Disney animator Glen Keane). And then they use his joke anyway, while still pointing out that it sucks. It’s philosophical and dysfunctional all at once! 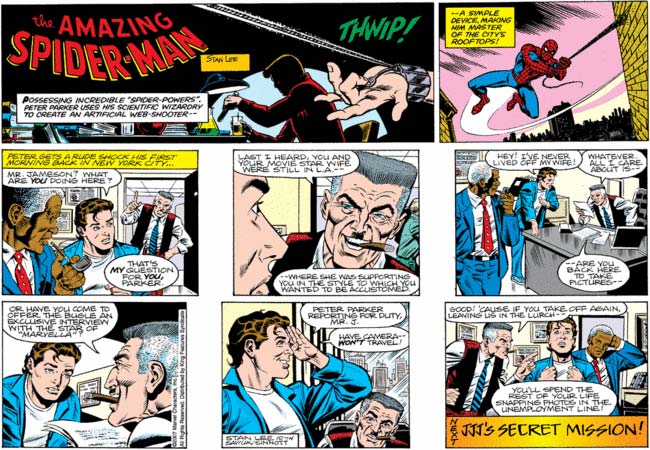 The world of journalism was shocked when Peter Parker, a virtually unknown freelancer, won the Pulitzer Prize for Feature Photography for his “The Other America” series. But nobody who saw those photographs of the people standing in line to receive their unemployment insurance checks doubted that he deserved it. The range of expressions in the photographs — running the gamut from hopefulness to grim determination to despair to fear — was captured tenderly in what one critic called “an emotional tour de force.” So why, when Parker got on stage to accept his award, did he conclude his short speech by thanking J. Jonah Jameson? The pictures hadn’t run in the Bugle. Nobody at the awards dinner could understand it, though those sitting near the flamboyant flat-topped editor reported that he bit down particularly hard on his unlit cigar when Parker said it.