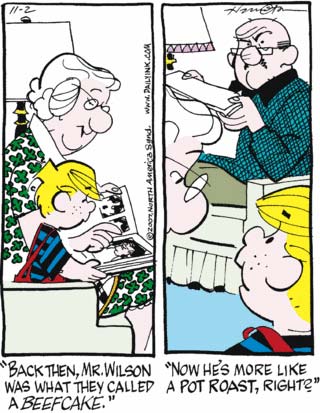 Oh, ho ho! That Dennis the Menace! Mr. Wilson is a fat lump, and Dennis isn’t afraid to point it out! He has no sense of social propriety! Ho ho!

OK, now that we’ve got that out of the way, please tell me the planet on which the following exchange would not be creepy and inappropriate:

Mr. Wilson looks disgruntled not because the neighbor brat has insulted his appearance (he’s sadly used to that by now) but because he’s suddenly realized that his increasingly senile wife has accidentally gotten out the “special” photo album. OH MY GOD MARTHA DON’T TURN THE PAGE!

Longtime readers of Judge Parker know that Sophie (here looking more disturbingly like a tiny monkey than ever) has a problem with voyeurism; recall this installment from one artist and 22 months ago (I think that works out to three days in JP’s internal chronology), in which Sophie gloats over having seen Neddy make out with her soon-to-be-ex-boyfriend. At least that was just good clean trembling-on-the-edge-of-puberty curiosity and fun, and neither of the kissees was married to her adopted mother. But don’t worry, Sam! Her lips are sealed! Now let’s talk about a raise in her allowance. Indian personal assistants don’t come cheap, you know.

(By the way, those of you who chortled at JP’s Raju storyline as unrealistic should probably read this.) 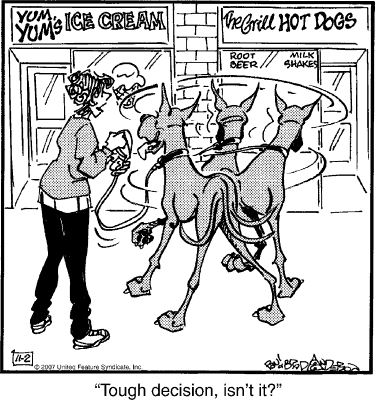 I’d really like to believe that the white band around Dottie’s waist is the broad white belt that the artist intended us to see, and not the result of her pants falling down so we can see her ass crack and garters. Really, I would. But somehow I don’t think I’m going to be able to pull it off.

On the other hand, I’m very pleased to see Marmaduke revealed as a three-headed demon hound.

I really am constantly impressed by Spider-Man’s ability to disappoint me. Just when I think my standards for the strip couldn’t possibly be lower, suddenly some new plot twist comes along to indicate that things are going to be much, much lamer than even I could imagine. Take the Persuader, here. When his upcoming appearance was hyped in a NEXT! box a Sunday or two ago, I was convinced that he was going to be a costumed supervillain of some sort — a spectacularly goofy one, to be sure, à la the Shocker, but a supervillain nonetheless. But now we see that he’s just a beefy guy in a suit. OOOH! He’s blows up newspaper trucks! He cleans his fingernails with a knife! He has a vaguely Hitler-esque haircut! SCARY!!!