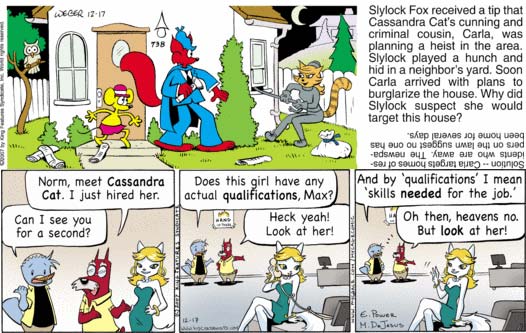 Ye cats! It’s a sexy feline trans-comic crossover scenario! I’m ashamed to admit that I hadn’t yet added My Cage to my Chron custom page, mostly because rebuilding a page with 70+ strips is a pain in the ass. But I’ve liked what I’ve seen of it, and its writer, Ed Power, is a faithful reader, so Cassandra’s glamorous appearance in the strip’s humdrum office setting has finally gotten me off my butt to do so.

Norm will pay for dismissing Cassandra based on her appearance, though. She’s 100 percent qualified — to steal the hell out of all your crap, buddy.

Meanwhile, with Cassandra off running some kind of white-collar long con, her cousin Carla is picking up her slack, theft-wise. I find it kind of endearing that Carla is wearing a cat-burglar suit despite being an actual cat. And today’s Slylock actually teaches a valuable lesson, namely: DON’T EVER TRUST CATS.

Everyone knows that Mark Trail has incredibly powerful fist and an inability to feel distracting human emotions; but you may not know that he also boasts a supernaturally discerning palette. Some years back, he proved his ability to identify illegal narcotics by taste, always a useful skill when you get involved in high-stakes adventure as Mark is wont to do. Today, however, as we watch him gobbling up the soggy, week-old off-brand cigar butts that Andy is faithfully digging up for him, I’m beginning to worry about the guy a little bit. 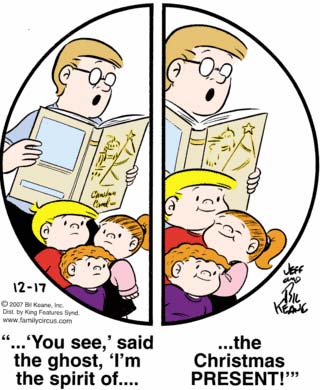 Dad bellows Charles Dickens to nobody in particular. The kids stare around dumbly, then smile in a greedy, Pavlovian response to a stray phrase that sounds like something they want. Enjoy this Christmas card straight from the heart of lunacy.

Wow, so it turns out that confusing and badly-drawn football action in a comic strip is actually kind of boring. 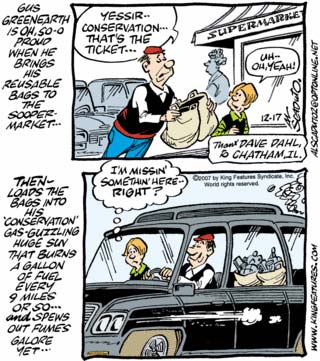 Yet another Comics Curmudgeon idea in TDIET! This one comes from eco-minded faithful reader Dave, who I urge everyone to refer to as “Gus Greenearth” from now on.

I love the way little Junior almost forgets his line in the first panel. “Uh … [damn it, I know it’s one of the classic TDIET catchphrases] … oh, yeah!” Also, bonus Scaduto-ism: “sooper-market.”