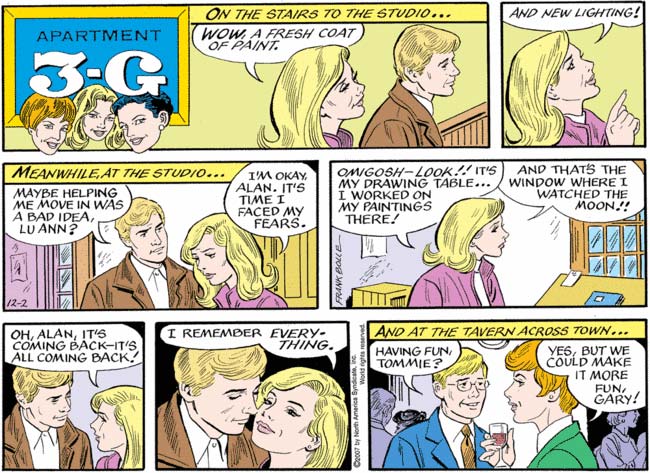 “I worked on my paintings there! And that’s the window where I watched the moon!! And this is the room where I spent thirty-seven interminable weeks taking orders from what may have been the ghost of a prominent late 19th century American artist, but was probably just a figment of my oxygen-starved brain! Ha ha ha! Oh, did I forget to tell you about that, what with my conveniently selective amnesia and all?” Seriously, are we just going to pretend that the whole Ghost Ryder thing JUST NEVER HAPPENED? ARE WE? Because … because actually that would be pretty great. I really hated that whole storyline while it was happening, and the last thing I want to do is watch it get rehashed by these two morons.

Meanwhile, at the tavern across town: “Yes, but we could make it more fun, Gary! I’ve just heard about this great new thing all the young people are doing! It’s called ‘sex’!” 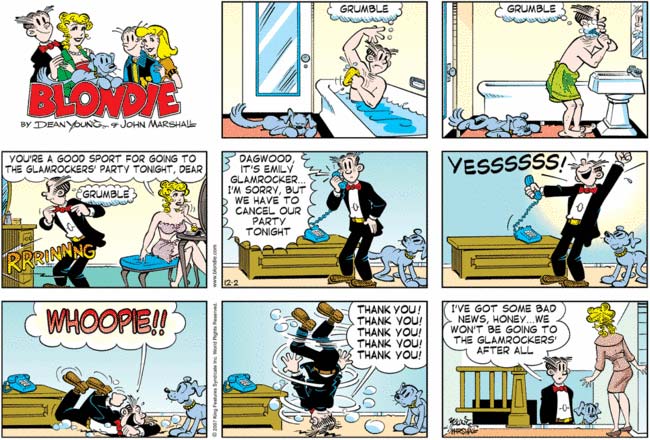 Yes, it looks like Dagwood and Blondie are friends with … the Glamrockers? All of them? From the entire history of glam rock? What about the ones like David Bowie, who eventually moved on to other aesthetics? Does this have anything to do with the Glambaster account?

I think the key to this whole puzzle is the middle panel of the bottom row, in which Dagwood busts out some old-school breakdance moves to celebrate the fact that he doesn’t have to go sit on the Glamrockers’ couch and watch Velvet Goldmine yet again. Obviously by the late ’70s or early ’80s Dagwood had come to believe that the whole glam rock craze was worn out and too studied by half, and found refuge in the new raw and frentic styles arising from the streets of the South Bronx. 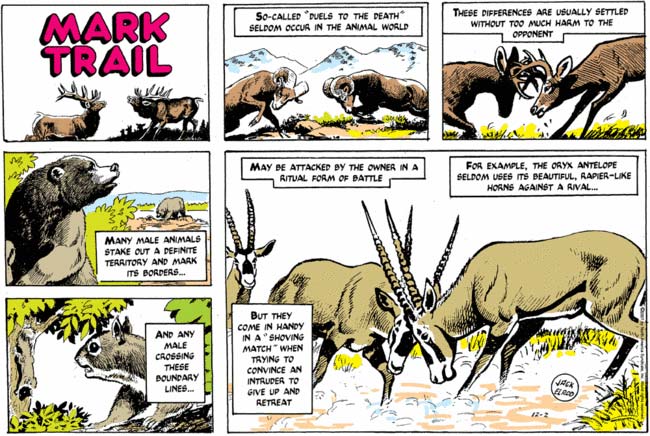 Normally Mark Trail’s Sunday strips exist in a world wholly separate from the daily plots, but I can’t help but wonder if today’s lavishly illustrated paean to ritualized combat is meant to serve as a sad counterpoint to the deadly conclusion to the battle for territory between Johnny Malotte and Bull Malone. Why can’t humans take a cue from our animal friends, who know how far is too far? Why couldn’t Johnny and Bull simply have forced each other to smell their knuckles by turns until one of them had enough and withdrew instead of resorting to gunplay? 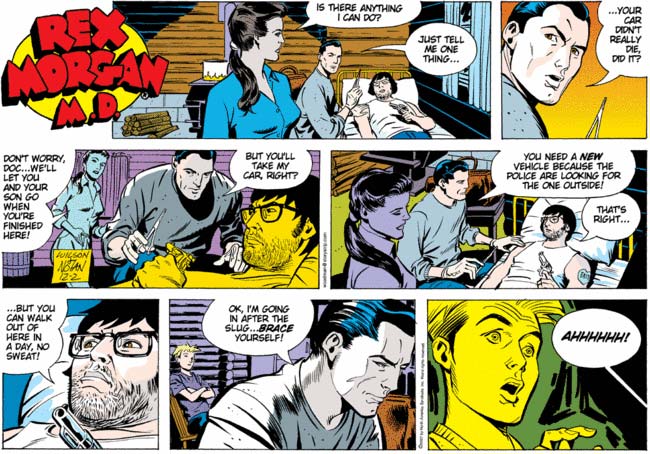 If there’s one constant in the world of Rex Morgan, M.D., it’s that Rex is kind of a dick. Thus, I’m actually kind of surprised that Rex didn’t take the opportunity to correct Mrs. Jail Escapee’s reference to Niki as Rex’s “son.” “I’m sorry, ma’am, maybe it’s because you’re a lowlife yourself, but it should be pretty obvious to anyone with any degree of class that this little street punk obviously did not grow up in the sort of upper middle class home that my doctor’s salary could provide. That explains why he constantly disappoints me, anyway.” Of course, he’s still a dick enough to have underdosed Mr. Escapee on painkillers before cutting his arm open. With Rex, being a dick always comes first, even if it means that he might get shot in the face. That’s just how he rolls.