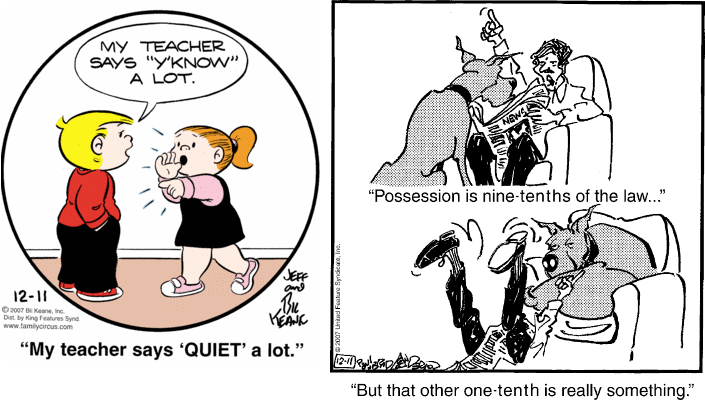 Many years ago (OK, three, but that’s a long time in the world of blogging), I decried the narrative technique on display in today’s Family Circus as “dialogue that’s half in word balloons, half in quote marks below the panel, and all half-assed.” Today I think the narrative trickery is there only to distract us from the panel’s total failure to make sense. Never mind the fact that the only people who criticize the youth of today and their “y’know”-saying ways are roughly six to eight times older than Billy; why is Billy standing there with studied ease, one hand in his pocket, as Dolly bellows in his face from six inches away? Are they meant to demonstrate the differing attitudes of their teachers — one all mellow and relaxed (possibly due to weed) and one all shrill and controlling (possibly due to coke)?

Meanwhile, on December 10, 2007, after 50+ years, Marmaduke’s creators apparently ran out of enormous-dog-themed jokes that can be told in a single-panel format, and beginning today will be trying out this “sequential art” concept they’ve heard so much about. Readers who have always been concerned about how closely Marmaduke’s owner resembles Hitler will be made uncomfortable by the upper half of the panel. 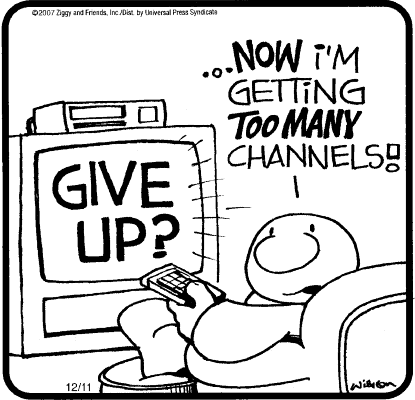 I’m all in favor of Ziggy being taunted by his television set, but this just seems like a friendly jest as he attempts to scroll through all the wonderful entertainment offerings provided by his local cable company. We really need for the question mark on the TV to be removed, along with Ziggy’s dialogue, to provide the sense of soul-crushing ennui that I demand from this feature.

I think we’re all glad that Ted has moved from unshaven, unemployed layabout to chipper seasonal minimum wage worker, but someone needs to tell him that he SHOULDN’T. WEAR. THE HIDEOUS ORANGE VEST. IN. THE HOUSE. With the nametag and everything. Really, Ted, just because they don’t come home to find you on the couch screaming at your judge shows doesn’t mean that your family has forgotten who you are.

On the bright side, it’s probably only a matter of time before Ted joins the cast of Shortpacked.

Remember, kids, you can make your holiday season ever so much more convenient — with stealing!

Ha, ha, “legs!” Everything smells like “legs!” Don’t kids say the darnedest things? Sometimes they can be a little confusing, though, especially when they use quote marks. Let’s call in an expert to help clear this up:

Well … that does make more sense.

And I leave with another amusing out-of-context panel:

The Archie Joke-Generating Laugh Unit 3000 has discovered either absurdism or HotSweatyMasturbatingCoaches.com.