I actually kind of admire the spare joke at the core of this Beetle Bailey: Beetle doesn’t want to climb the steep hill, despite the fact that the hill’s steepness is exactly the point, because he is lazy and thus resistant to most of the activities the Army has planned to improve his readiness for combat. This being Beetle Bailey, the effect is ruined to a certain extent by the slapdash visuals. The presence of the plunger in panel two is puzzling enough (does Beetle plan to use it as a makeshift bludgeon in a last-ditch effort to avoid enforced PT?); it’s made even more baffling by its total absence in panel one, implying that Pvt. Bailey received and confirmed his orders, went inside to get a plunger, and then came back, coming up with this devastating zinger on the way.

Another problem: the “hill” is clearly a pile of salt or gravel about five feet on the other side of that chain-link fence.

When Blondie says “Well, that’s a real surprise,” she doesn’t mean Dagwood and Mr. Dithers’s shared enthusiasm for a fascinating period in American history; she’s referring to mere fact of Dagwood’s own Civil War buffery, which has managed to go unremarked and unnoticed in 75 years of this strip’s existence. Still, I’m looking forward to future strips where Dagwood affixes outrageous 19th-century-style whiskers to his face with spirit gum and goes trooping off into the woods with his fellow re-enactors. Look for history to change when the defense of Little Round Top is fatally undermined by one soldier’s forty-minute pause to prepare and eat an enormous sandwich.

Haw haw! Oh, have you ever noticed that the men, they cannot cook? Becky probably has some difficulty in the kitchen, trying to manipulate everything with only one arm, but when it comes to cooking, a missing arm isn’t anywhere near as difficult a handicap to overcome as a penis!

OK, I admit it: I was holding out hope that the love triangle between Mary, Chester/Ralphie, and Ralphie’s Real Owner wasn’t over and that there were new shocking developments in store. But since we appear to be moving on, I now must acknowledge that this is indeed one of the lamest Mary Worth storylines in recent memory, which is, you know, really saying something. Still, I’m glad to see the perpetually self-pitying Dr. Corey the Younger lumbering back into view. In the wake of the dog of a storyline (ha ha, get it?) just concluded, we need his patented brand of ego-driven romantic disaster to cheer us up. Perhaps we’ll see him try various supposedly mood-lifting activities in an attempt to alleviate the psychic pain from his cruel dumping. (“Where’s this ‘methamphetamine high’ I’m supposed to be feeling?”)

We also might get to see him put his medical skills to use. In panel one, Mary is clearly rearing back in terror as that squirrel prepares to launch itself at her face. Tomorrow, Drew will have to do some emergency stitch-up work as Toby desperately tries to subdue the enraged beast.

Now here’s an exciting story development I can get behind! Does Dr. Rex Morgan, outdoorsman extraordinaire, believe that he can use the possibly decades old and almost certainly highly explosive hooch left in this still to create a gentle, controlled fire that he and Niki can use to dry off and keep warm? Or does he intend to use the moonshining apparatus as some kind of improvised incendiary projectile to fend off their pursuers? Either way, excitement is in the cards! And by “excitement” I mean “massive second- and third-degree burns.” 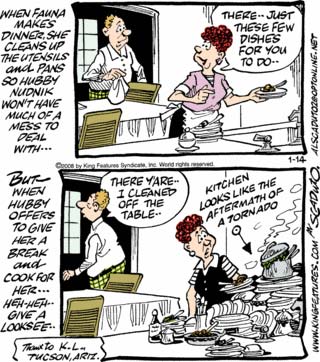 Tucson’s “K.L.” is in fact none other than faithful reader The Divine O’F! I’m sure she’s thrilled to have been Scadutoized, even though she looks suspiciously like Ronald McDonald in the second panel.