Not to try to apply “reality” to Apartment 3-G or anything, but: don’t these people live in New York? You know, the city with one of the most extensive and useful public transit systems in the world? I don’t know if you’ve heard, but in New York lots of people ride the subway instead of taking a cab — even middle-class white girls! By themselves! This will probably shock the A3G creative team, but post-Giuliani it’s practically like riding the monorail at Disneyland, with only a slightly higher possibility of encountering a unconscious, smelly hobo.

Maybe the route from Blaze’s apartment to Lu Ann’s doesn’t lend itself to subway travel, but it is kind of weird that you never see any of these kids on the train. I mean, obviously Margo would refuse to board public transit of any kind, but Lu Ann and Alan, with their high-paying jobs of art teacher and starving artist/part-time curator/junkie, respectively, seem like prime candidates for MetroCard ownership. 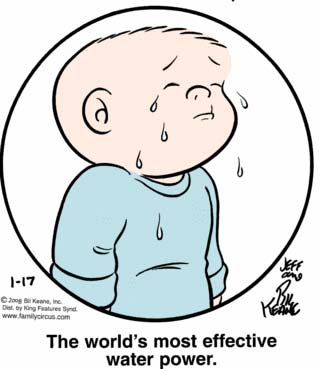 Much as it warms my black, black heart to see a Family Circus kid weeping openly, I’m a little disturbed by the sudden shift in this feature from its standard “Little kids say and/or mispronounce the darnedest things” to some kind of Pluggers-style play on words (for certain limited definitions of “play”) by an omniscient narrator. On the other hand, I admit to being pleased by the image of a perpetually sobbing PJ being hooked to electrodes and used as an alternate source of power for the Keane Kompound after they became convinced that being connected to the utility grid kept them under the thumb of the “gummint.”

Speaking of “plays” on words: Hey, Pluggers, you get a pass on this one because it doesn’t make any sense at all, in that it’s not at all clear what if any alternate meanings of “swinger” and/or “family tree” are being referenced here, but don’t let me ever catch you inching towards doing a joke about “plugger swingers” again, OK? Ever. I mean it. There will be rage.

I’m assuming that Drew is assuming the “Serious High School Senior Yearbook Photo #2” pose in panel two because he’s casting his mind back to the sweet net of physical love he cast over Vera — she thought she could escape, but her struggles have only snared her further! Faithful commentors suggested a number of more plausible reasons for Vera’s change of heart. Good: Vera’s pregnant! Better: Vera got the clap, and she knows from where! (Note that these two suggestions are not mutually exclusive, obviously.)

I’m pretty sure that tomorrow we’ll see that the stem-less word balloon in panel three is emanating from the Phantom himself, aka Ghost-Who-Buttresses-The-Patriarchy, who’s going to tell them a little something about the Jungle Patrol, specifically that it’s not for “girls.” Diana, who’s heard this spiel before, has already taken a phone call. Possible sexism aside, everyone who thought that in yesterday’s “That’s the answer! Jungle Patrol!” they had found a catchphrase for the new millennium must now admit that “Whoa, girls! Let me tell you a little something about the Jungle Patrol!” is even better.

In other news, when I first saw panel two, I thought cop-lady was grabbing waitress-lady’s left boob. I really, really want the Phantom to be more interesting than it is. 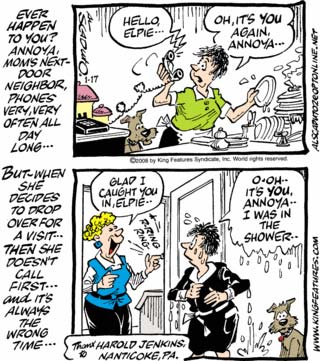 Today’s TDIET is submitted by faithful reader Harold, who pushed this family-friendly feature to the brink with his demand for red-hot just-out-of-the-shower action.