Say, have you ever wondered what it would have been like if Casablanca ended not with Rick shooting Major Strasser and Captain Renault covering up for it, but with Rick hitting him in the back of the head and barely knocking him unconscious, after which the two of them just jauntily walk off to enjoy their last few hours of freedom before being sent to a concentration camp? Well, today’s Spider-Man is for you, sort of!

This is not to say that Spider-Man is a Nazi, as my scenario would imply. The Nazis may have been the most evil regime in history, but at least they did stuff. If all Hitler did was sit around watching TV and complaining about the Jews and their terrible sitcoms, the world would be a much better place. 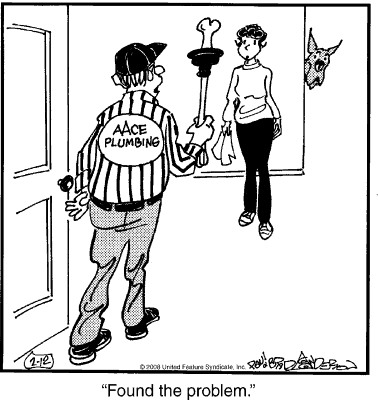 Since there’s no way an actual plunger could be holding a bone in place like that, I’m going to guess that the problem found by Aace Plumbing is that Marmaduke’s family’s “plunger” is actually a ghastly trophy made out of a human femur. Possibly the femur of the last plumber who got too nosy.

Well, now we know: Andrew Gregory is Tyler Jay with a longer head. The spit-curl resemblance is really uncanny; perhaps this is the haircut assigned to all new mentally unbalanced Gil Thorp characters. In panel two, the A-Train actually appears to be literally unbalanced as well, covering up his inability to stand up straight with his usual demented patter.

For those of you not following along with Judge Parker at home (and really, who could blame you if you aren’t), Gloria is giving Sam a more or less accurate recap of the story of How Steve Lost His Legs, as told to her by Steve in detail, which recounting we saw in this very comic strip mere days ago. I look forward to seeing Sam tell Abbey next week, who’ll tell Biff Dickens, who’ll tell his wife, and so an and so forth. It’ll be like a game of telephone, only this is Judge Parker, so it’ll be a boring game where the information doesn’t get changed in the retelling.

Comics in which Garfield drolly remarks on his sodomization by ice-cold thermometers = comedy gold. I’m totally serious about this.