Today’s Zits disturbed and horrified me — not, I hasten to add, because there’s something wrong with a woman of a certain age (or any age, for that matter) dancing around in such a fashion as to cause her bosoms to jiggle and sway. No, my gripe is in how said breasts are depicted. The rightmost Connie is depicted frozen in a moment in time and leaning back, presumably as she dances to the music; in a world governed by the laws of physics as I understand them, her breasts should themselves be at the top of their gentle arc, perhaps raised up a bit from the rest of her chest. Instead, they appear to be wriggling around as she stands motionless, as if they were the tentacles around the mouth-parts of Cthulu, an illusion made all the more real by the fact that there seem to be six of them. If I saw such a thing on the front of any human female, let alone my mother, I too would beg for hysterical blindness.

Speaking of nameless horrors, there’s something unsettling about today’s Cathy, and not in the usual way, either. What exactly does Irving mean by “a person like you”? And why is Cathy standing in front of some kind of inky black portal in the final panel? “I know! That’s why I can’t go back!” she proclaims, terrified of the unspoken but no doubt awful fate that awaits her at the demonic so-called “gym”. But it doesn’t matter that she refuses to go — the darkness is looming behind her, threatening to swallow her up.

Man, check out Liz’s face in that final panel. She looks pretty pleased with herself, doesn’t she? Remember, fellas: Nothing can bring a woman to orgasm faster than explaining carefully, with careful attention to the grammatical case of your relative pronouns, that you respect and value and her autonomy.

Meanwhile, Anthony is driving ever closer to the secluded clearing where he disposes of the bodies. 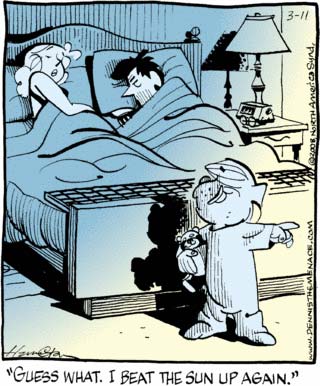 This may seem on the surface to be more run-of-the-mill submenacing, but what if by “I beat the sun up again” Dennis means not “I woke up before sunrise” but “I bested the sun in hand-to-hand combat”? You have to admit that if an eight-year-old kid managed to pummel our sun, which is 800,000 miles in diameter and has surface temperature of 9 million degrees, into submission, that would be pretty menacing — both because it would be a bad-ass achievement in and of itself and because it would send our planet’s temperature plunging close to absolute zero, killing all life on its surface. Henry and Alice will barely have time to bestir themselves before the very atmosphere freezes solid!

I have to admit that I find the little puff of smoke hovering over the toaster in the first two panels of this strip totally adorable! It’s like the toaster is angry! Possibly because it has to just sit there and listen to this ancient, horrible joke.

Ha ha, the old lady slipped on the ice, probably seriously injuring herself! Man, I can’t wait to see how this barrel of laughs develops.