In the interest of saying something nice once in a while, I will admit that today’s Curtis cracked me up. The “Curtis is obsessed with Michelle” bit is overdone, but I found his dad’s anti-cheese diatribe to be completely hilarious. “Double cheese, melted cheese, cheesy sauce, cheesy sticks, cheesy cheese! Cheese cheese cheese!! It doesn’t make sense!” I mean, sure Curtis’s non-stop mooning is annoying, Greg, but at least he isn’t going to bust a vein about cheese.

“No, Lu Ann, I believe that women are parasites! And men are junkies! Those are just the core values I was brought up with!” 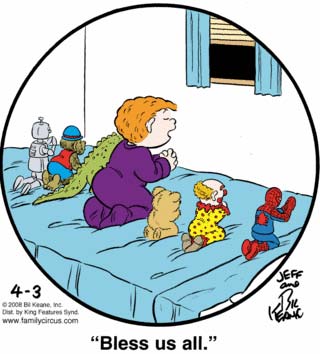 Jeffy thinks he’ll get in good with his God if he provides Him with new worshippers. IT DOESN’T COUNT IF THEY’RE INANIMATE OBJECTS, JEFFY. YOUR RUBBER DINOSAUR HAS NO SOUL TO SAVE.

Most of these toys I could vaguely buy as things you could fold up into the kneeling position, but that clown looks way too much like a living little clown homunculus. Frankly, it scares the crap out of me.

Sure, it seems like this is a joke, but since he’s testing for syphilis, it actually could work.

It seems that knowledge of “goths” has penetrated into the Walker-Browne compound. GOD HELP US ALL.