Hi and Lois is the last strip you’d expect to see bucking any sort of comic convention or cliche. But usually when a comic strip mom discusses the withering of the last few social institutions that keep high school from becoming a nonstop orgy, they usually look worried or upset, not like they’ve just taken a large hit of Ecstasy, as Lois does in the first two panels of this strip. Maybe in that way that moms “just want you to be happy,” she’s pleased to know that Chip is experiencing as much sexual pleasure as possible without any of that buzkilling emotional attachment, just like she does with half the neighborhood. Of course, no matter how enthusiastic she is about her son’s slutting it up, she still shows the appropriate amount of outrage over the terrible, terrible “punchline” of the strip.

(Unrelated, but: in panel two, Lois appears to have freckles. Did she always have freckles? Or are they a sign of the new, freaky Lois?)

Say what you will about TJ, but the boy never stops thinking strategically. While most guys would have been satisfied to let their roommate rest on his laurels and share some tales of triumph (“A definite, meaningful kiss.” “And that definitely means…?” “Tongue, dude!”), TJ is already plotting to make sure his friend gets to the next level. Brad will touch a boob by 2009 if TJ has anything to say about it! 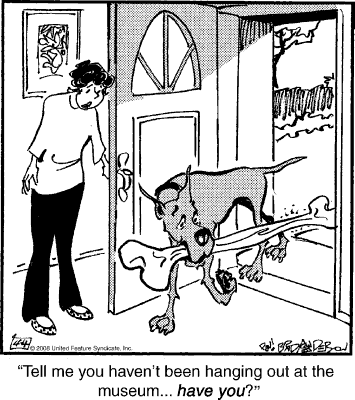 I’m not sure why Marmaduke’s owner is so desperate to believe that he didn’t just come from the museum. If that were the case, at least the original owner of that enormous bone would have already been dead by the time Marmaduke found it. The other possibility is that there’s a freshly killed and dismembered rhino somewhere nearby, probably on her front lawn.

Striker may be a whore, but by God he’s not a cheap whore.

Pluggers know that you have to be ever-vigilant if you want to make sure that nobody leaves the compound.