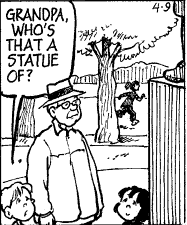 While the joke in today’s One Big Happy isn’t really worthy of note, there’s something very disturbing going on in the background of the first panel. Can you see it? Here, let me blow it up for you: 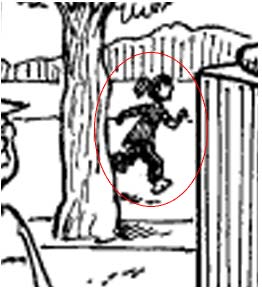 My God, is that … some ponytailed individual running through the park? Carrying a knife in ready-to-stab position? Is he or she fleeing from the scene of a vicious murder? Or running towards a hapless victim with the intention of committing one? Or are we seeing the midst of a multi-corpse stab frenzy? This panel will go down in history as the Zapruder Film of the modern comics.

Stepping back from the total insanity for a moment … ha ha, just kidding, this is Gil Thorp, and under the new regime the total insanity is back, baby. To get a sense of this, look no further than panel three, where the pitcher is apparently making that ball hang in mid-air with just his mind. I think Milford has found its new pitching phenom … in outer space.

Meanwhile, it appears that the Very Special Spring Storyline is going to involve Gil throwing himself wholeheartedly (and disastrously) into his student-athletes’ lives to make up for years of disinterested coaching. It’s only now that it’s occurring to him that letting a deranged old man spouting obvious lies basically coach his baseball team may not have been the best idea last spring. Anyway, this year’s first victim of Gil’s new over-involvement is apparently going to be “problem child” Tyler Jay. Here’s a hint, Gil: If you want Tyler to keep on the straight and narrow, don’t let him play on the baseball team, where he’ll have ready access to many club-like objects.

The innocence of youth is apparently a myth, as baby Trixie seems to imagine a future where people are forced to desperately stitch up the bleeding, mangled bodies of their loved ones as a matter of routine. 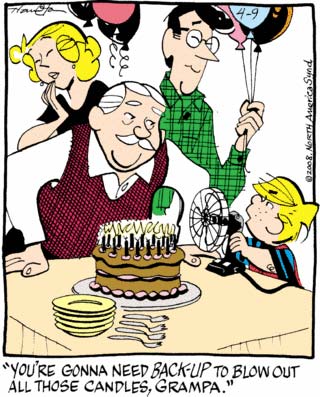 Usually, the Mitchells roll their eyes or loosen their collars in awkward humiliation when Dennis says something inappropriate, but here they’re positively gleeful at his suggestion that his aged grandfather is old and feeble-lunged. I’m not sure whose father he’s supposed to be, but Henry and Alice are obviously both lacking in filial piety and deserve to have Dennis foisted on them by the universe in karmic retribution.