OK, after a full week of this, we get it: Michael’s a brat and Elly’s overwhelmed. But how on earth do those other comic moms do it? Let’s go see!

Oh, you do not mess with Diane Wilkins — Curtis knows it, Greg knows it, and I’m willing to bet God knows it. I give author Ray Billingsley a lot of richly-deserved grief, but his characters act like people. Who doesn’t know — and secretly fear — a force of nature like Diane?

Linda Lopez-Bushka is quieter, but no less effective. Jinx has been thwarting Bull’s incompetent attempts to bond, so Mom shows them both how it’s done. And engineers a pleasant summer in a quiet house with the soaps on and her feet up.

With this strip, Crankshaft finally reaches the lower limit of what can reasonably be called “wordplay.” Jeff Murdoch there is Ed Crankshaft’s son-in-law, an ineffective, self-pitying drudge who hates his vicious harridan of a mother, yet is moving her into his home, possibly because it’s the only way he can cause her pain. It’s true: Ed Crankshaft is the comic relief in this strip.

Gah, I can’t close the week on that note! Let’s see some bonus panels! 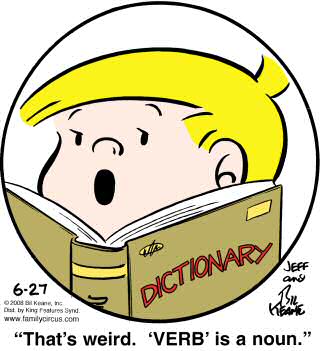 Yes, Billy, and “LAME” is an adjective. But look how the tyke’s melon head has grown, and the mouth with it! A few months more and its blackness will consume the entire frame, matching the artwork to the captions at last. 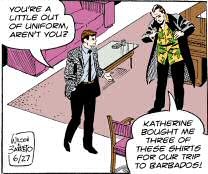 Judge P. comes back after eighteen months and promptly leaves on vacation. Who does this guy think he is — Josh?