Monday night is COTW time ’round these parts, but I have a couple of items of possible interest to you before we get to that. First off is this awesome pic from faithful and very pregnant reader Jennifer, preparing to train her baby in the ways of Mark Trail by means of an Official Fist o’ Justice T-shirt! 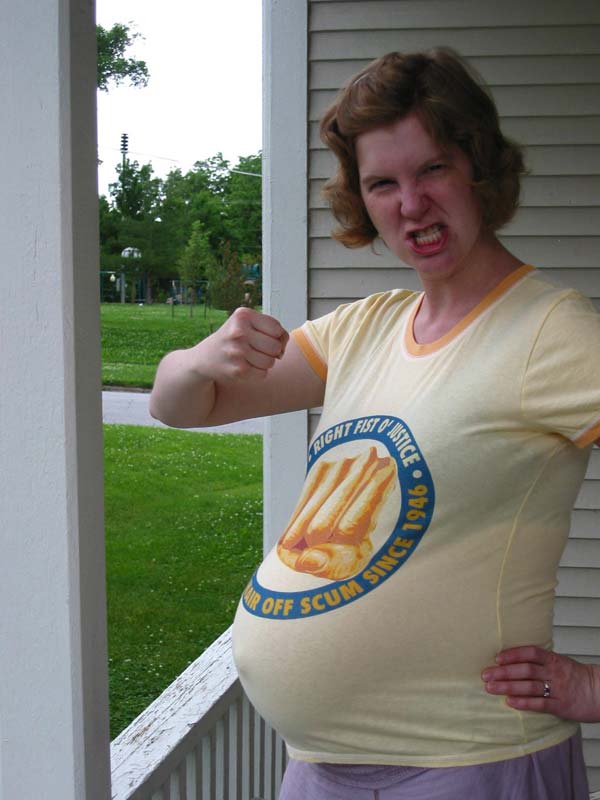 Jennifer sent me this picture a couple of days ago, so for all I know she could be giving birth RIGHT NOW! Anyone in range of that Trailian fist, know this: When she says she wants the pain meds, you give her the pain meds. And once the kid’s arrived, don’t forget, Jennifer: there’s an infant version available!

Also! You may recall that a few days ago that Jamaal of Herb and Jamaal, in his litany of signs of his alienation from his fellow man, made passing reference to “no blog replies.” Faithful reader Mike Podgorski took this to the logical next step, and created A “Blog” About Things, in which Jamaal can finally find his voice. Sadly, there are very few comments as of yet, no doubt reinforcing the big lug’s self-loathing. Mike is also the man behind the Amazing Spider-Blog, which focuses on Spidey’s inane newspaper adventures; I’m not sure if I’ve mentioned it here before, but it definitely deserves a look!

“Poor Toby — wandering aimlessly around the Hotel California-like environs of Charterstone, sentenced to a pointless existence as a beard for her bear of a husband, deriving sad pleasure from meddling in the stilted courtship ritual of two senior citizens. I make it sound more interesting than it really is.” –trey le parc

This comment was painstakingly selected from our almost-as-funny finalists:

“This week’s Rex Morgan plot seems like the world’s most complicated teen-STD lesson. ‘You know, kids, every time you wrestle on a mat, it’s like you’re wrestling with everyone who’s ever wrestled on that mat before.'” –BigTed

“After Rex talks to the security guard, he meets June and Carol in the gym! I do not think that warrants exclamation marks! But we’re getting them anyway!” –Bootsy

“Alan is quite the foppish crackhead. ‘Now, to abscond with my purloined bills and beat a hasty path to the door of that rakish purveyor of contraband pharmaceuticals. My central nervous system shall be well and truly stimulated within the hour.'” –Ned Ryerson

“I’m willing to endure as many ‘Look at all the shoe stores — no wonder they call it Broads-way!’ and ‘There’s too many minorities!’ jokes as Batuik and Ayers can throw my way as long as this storyline holds the remote possibility of Crankshaft getting mugged. It will be a fitting end to his RAPIER WIT. Because he’ll be stabbed. Repeatedly.” –Fat Charlie

“Of course, Ron’s ‘good news’ is he’s re-evaluated his life thanks to Mary’s sage council and he’s getting back together with his ex. Now Mary gets to taste the bitter tea leaves of poetic justice, spritzed lightly with the acerbic lemon of irony.” –A Lemur

“I’ve finally figured out what Frank Bolle’s A3G artwork reminds me of: the illustrated emergency exit instructions you find in airplanes. No matter how dire the straits of the dope-addled junkie, he exhibits the vacant smile and pressed collar of a mannequin in a Macy’s catalog.” –minor flood

“I think Margo set the Wedding March to play when Tommie calls, with the dual purpose of cruelly mocking the hapless redhead and reassuring herself that she is not actually the MOST pathetic person in the universe.” –Violet

[In response to speculation that Margo wants to get married because her biological clock is ticking]: “Sadly, sperm shriek and kill themselves at the thought of entering Margo’s uterus and the horrible, naked, ringless egg that awaits them. The hardier ones actually refuse to leave their host, clinging to whatever they can, preferring the relatively merciful death by post-coital urination to the horrors that lie Over There.” –Paul1963

“‘Grassroots political activities’ = ExxonMobil astroturf campaign, from the looks of that haircut.” –BCist

“It would be the greatest thing ever should Grampa Jim pull a Farley at the Granthony-Lizardbreath nuptials. Which, of course, must go on while Deanna (who gets all the icky jobs, like being married to Michael) has to wheel the body out.” –Mac

And we must conclude by giving thanks to two very important groups: those who put some money in the tip jar, and our advertisers: