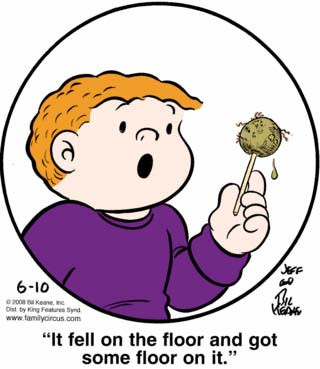 Congratulations to the Family Circus for providing the most stomach-turning visual image of the day. Usually I think the limited palate used to colorize the King Features strips detracts from their visual impact, but there’s no question in my mind that that’s exactly the right shade of brown to use to instill total revulsion into the hearts of right-thinking people everywhere. With the lint on the side, it actually looks like Jeffy has a shrunken head on a stick. The little droplet of extra brown coming off the side in particular will be featuring into my nightmares.

Like so many artists before him, Alan is proving to be a remarkably inept businessman. I love his look of shock and disgust in the second panel as he contemplates the arrival of people who actually want to buy what he’s selling. Hey, Alan, who did you think was going to buy your “rock,” hedge fund managers and mid-level British aristocracy? He’s about to learn a hard lesson, which is that when you deal crack, you end up having to deal with crackheads.

It’s painfully obvious that Elmer and his “BFF” Branden have run off together to get married so as to fix the former’s immigration situation, so I won’t dwell on that (except to note that, based on the experiences of friends and family who have wed Canadians, it does not work like that anymore [if it ever did] so please don’t try this at home). Instead, I feel a need to focus on Coach Mrs. Coach Thorp’s clothes. More specifically, what the hell is going on with her clothes? She seems to be wearing some kind of belted one-piece collared-dress-coullotte number, which, I feel, would be a bad fashion choice if such a thing actually existed, which I’m pretty sure it doesn’t.

I’d like to say that “What makes you think I know anything about them?” is one of the most reasonable possible answers to “I need to know what happened to the old wrestling mats at Hamilton Middle School!” We also would have accepted “Wrestling mats? What the hell are you talking about?” But panel three shows why our be-soul-patched miscreant was so quick to flee the man he thought was a cop: he’s obviously incapable of standing up to even the gentlest level of interrogation. “Hey … is this about the kid that was smothered to death by those wrestling mats and then his body was thrown in the river? Wait, MRSA? What’s that? Oh, un, then never mind about the first thing.”

Ha ha, Cherry, it’s all well and good that you want to stand on your own, but I’m not sure that you’ve noticed that you have a vagina. The fact that Kelly Welly is similarly endowed and yet manages to function without a male guardian is the main reason why Mark and Doc find her so unsettling. But, you, my dear, are no Kelly Welly. In fact, I think you’re about to accidentally stick your hand into that pot of boiling water.