Gosh darn it, those Sunday strips are so big! With my feeble attention span, I could only focus on these small bits of them:

Hmm, there were 50,000 grizzlies in North America, but now there are about 1,200 … plus another 30,000 in Alaska? Apparently the Russians, not satisfied with merely reversing the political consequences of the Alaska Purchase, are secretly in the midst of building a canal down the Alaska-Canada border and using the resulting dirt to fill in the Bering Strait, thus making the grizzy-rich Seward’s Icebox a part of Asia! Mark Trail’s gonna have to punch a lot of Russkies to stop this.

The philosophical implications of Roz’s first statement here — “I hate time” — sort of boggle my mind. Does she hate time as an abstract concept? Does she wish that everything happened at once? Is she actually opposed to entropy, which scientists call “time’s arrow”? These intellectual musings serve to distract you from her statement in the second panel, which, given that Shoe takes place in an all-bird milieu, we must take quite literally: Roz has horribly mutilated one of her fellow avians and is wearing its feet as some kind of grisly trophy. Her “somewhere” implies that she doesn’t even know the whereabouts of her hapless victim, implying that she committed her ghastly crime in a fugue state — so perhaps it’s “lost time” that she really has a beef with. 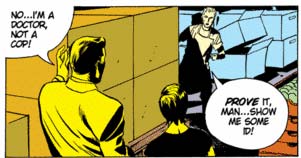 Speaking of philosophical dilemmas, Rex is about to find out just how hard it is prove a negative. “See, here’s my ID, which says, ‘Rex Morgan, M.D., a doctor, and totally 100 percent not a cop.'”

Ha ha! Jeffy is terrifying his little brother with some kind of horrific demon mask! Oh, it’s all fun and games until Daddy finds out he’s been poking around in the Ritual Room again.

“She is convinced that Shady Shrew is the nut-grabber.” Oh, well played, sir.