I’m intrigued by Julius Dithers’ latest attempt to achieve Big Brother-like omnipresence in his workforce. It’s kind of surprising that his employees must spend the day staring not at his sneering face, but at his clenched fist. At first glance this would seem to be the ultimate expression of the unabashed threats of violence that underpin his thuggish regime, the identity of the Leader reduced merely to the instrument that he uses to deal out pain. But note that the fist isn’t advancing knuckle-first at the viewer in the style of a righteous fist o’ justice; rather it appears to be waving in the air in impotent rage. In this sense, what’s meant to be a symbol of tyranny in fact exposes the regime’s weakness and plants the seeds of its eventual overthrow.

It’s also possible, but unlikely, that this is a close-up of Dithers flashing a proud Black Power salute. 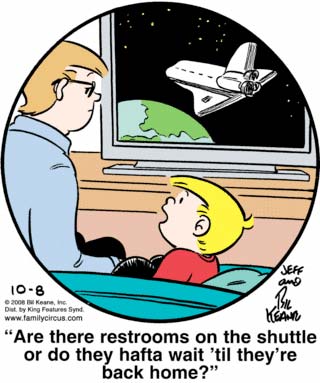 This may look like yet another “freakishly large-headed kids say the stupidest things” installment of the Family Circus, but I actually think Billy is using the live NASA feed (the only thing Daddy will let the kids watch, other than Veggie Tales and Davey and Goliath) as an opportunity to broach the subject of his father’s fanatical refusal to stop at rest areas during long car trips. “OK, dad, they’re in the terrible vacuum of space and need to stick to a tight schedule or they’ll run out of oxygen, so that makes sense, but why is it so important to ‘reach our mission objective within the established time parameters’ that I have to pee in an empty coffee cup?” 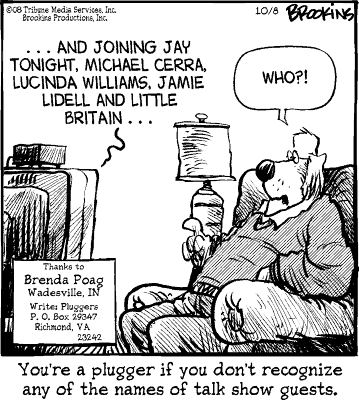 Pluggers are too lazy and ignorant to spend thirty seconds looking things up on the Internet so as to spell people’s name correctly or determine whether something is the name of a person or of a television show.

Hi is looking stunned in the second panel here because his teenage son’s act of disrespectful rebellion: rocking out to a song released in 1975.