Click here or above to support the Comics Curmudgeon. Thank you!

Ah, love! Makes the world go ’round ‘n’ all, but its course never did run smooth — let’s watch!

Well, everyone feels good for Ted, of course, but let’s not neglect the opportunity this represents for Alice. She hasn’t.

This only seems to be a test of Toby’s trust and Ian’s forgiveness. Toby’s issues center on her own impulse control and Ian’s attentiveness: when she blurts out her secret during the first five seconds of their reunion, will he listen to a word she says? Mary’s issues, as ever, concern tactics, survival, and opportunities for fraud as executrix.

Luann and TJ badgered Perpetual Tool Brad into overbidding for some skeezy pay-for-play calendar scheme. Today’s strip mocks itself, so I don’t have to.

In Mark Trail, love rarely gets beyond, “More pancakes, please!” Could this time be different? Wetland-drainin’ cityfolk Sue and Charlie apparently have romantic history. But while Sue can still touch her cheek (or perhaps her ear), it appears she’s lost touch with her heart. Poor Charlie avenges the dual humiliations of sexual rejection and a dead-end career in a family-owned business on that innocent hallway Pothos. In the end, though, it won’t matter. It’s a hardy plant.

Hey, does Charlie look familiar? He should! Here’s Hoyt, the Chicken-kickin’ Beekeeper from the awesome Molly epic of 2006: 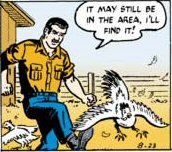 Hoyt is a kind of secular saint among Trailfans — he helped set in motion a complex narrative involving bears both pet and arrow-assed, Kelly Welly, mobs of bloodthirsty but ultimately lazy upright rural folk (an apparent Pluggers crossover), one-upsmanship on the Rain of Frogs from the Book of Exodus, and many other delights. For this, and after a meek apology, he was allowed to keep his hair.