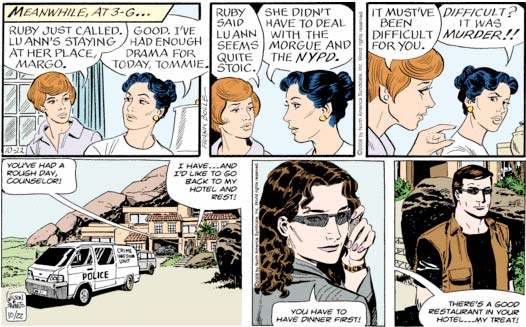 Today we have an object lesson on how two comic strip characters can be in remarkably similar scenarios and yet evoke very different reactions from their audience. Both Sam and Margo are talking about what a “tough day” they’ve had because they’ve been minorly inconvenienced as a result of being on the periphery of the brutal murder of somebody else’s loved one; yet Margo is of course loved and adored by millions of fans, whereas if anyone thinks about Sam at all, it’s something along the lines of “Oh, look, it’s that smug dick in the sunglasses.” That’s because Margo has the good sense to take things really, really over the top — bad-mouthing her bereaved roommate, deliberately dropping inappropriate metaphors, making it all about HER HER HER, just like everything else that happens within a ten-mile radius of her or anybody that she knows — whereas Sam is, well, just being a smug dick in sunglasses, as per usual. Sunglasses and a stupid vest.

Let’s say that you run a major syndicate that, among other things, produces hilarious and engaging comic strips. And let’s say, for the sake of argument, that you have reason to hire people to color said comic strips who are for some reason not the same people who draw those comic strips in the first place. Now, because your strips are so hilarious and engaging, those professional colorists may well be wont to read them and be amused and/or engaged by them in the course of their duties. But if they take a few seconds to chortle under their breath or nod knowingly while on the clock, they are literally stealing from you, obviously, because you’re paying them while they’re engaged in what’s clearly a leisure-time activity. What to do, then? The solution is plainly to only hire colorists who (a) hate comics so much that they refuse to read them, (b) don’t speak English, or (c) are illiterate. And if that means that sometimes blatant in-strip color cues go ignored, well, that’s just the price you pay for running a tight ship, you know?

So, are Internet service providers the new post office, not only in the sense of “organizations that deliver information from your home anywhere else in the world for a mere pittance”, but in the sense of “and can you believe how slow it is! Ha ha! And how about that airline food, ladies and gentlemen, am I right?”

I know that the back of this weird panda-faced dude’s cab is just one of the eight or so Places In Herb And Jamaal Where Jokes Occur, and the beauty of the strip’s setup is that any joke can plugged into any of those places, but might I be so bold as to suggest that perhaps the punchline might have been better if it involved the slow pace of the cab’s journey to Herb’s destination? Or, you know, Internet providers, whatever, and hey, men and women, they sure have different views on relationships, don’t they? Ha! Boy howdy! 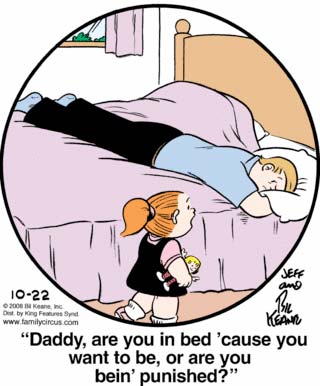 “Or are you dead? Mommy says that if you’re dead, we can have gin and ice cream for dinner every night, forever!”