It looks like Apartment 3-G, having made drug abuse and murder bland and vaguely boring, is about to do the same for China’s meddling in Tibetan monastic politics. Remember how Eric was supposed to be rescuing his brother from some combination Tibetan temple/hospital/Chinese prison thingy in Lhasa, or something? Apparently he took this Lodi character instead, which we may or may not have been told at the time? Lodi, I am assuming, is a stand-in for Gedhun Choekyi Nyima, who was chosen as Panchen Lama as a child with the Dalai Lama’s blessing; he and his family were taken out of Tibet by the Chinese government and haven’t been seen since, while the government has nominated its own candidate for the post. Gedhun/Lodi seems to be none the worse for wear for his time as a political prisoner, having learned valuable English and hiking skills. The question is, can he retain his sense of detachment from desire and suffering upon encountering the ultimate threat to any holy man: Margo Magee? 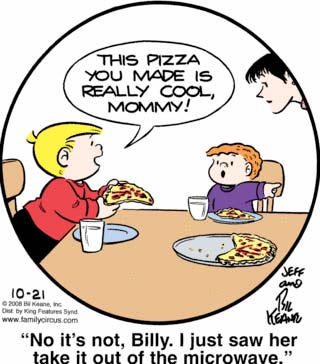 It’s obviously unsettling that the Keanes have some kind of gargantuan microwave that can heat up an entire full-sized pizza, though that may explain why Billy thinks that nuking food qualifies as “making” it. Poor Jeffy is once again stuck with the being-baffled-by-everyday-slang role usually reserved for comical foreigners, robots and aliens, and dorky white dudes. But what really gets me about this cartoon is the drooping tip of Billy’s pizza. I imagine that he’s gesticulating with the slice, the tip flopping up and down as he does so, grease splattering everywhere. I think that it would be pretty hypnotic to watch; no doubt that’s what Mommy is focusing on, which is why she looks so beatific despite being surrounded by morons.

“I mean, Toni never talks about him, but he hangs around in my mind … brawny … vaguely threatening … half-dressed…”

Oh, Dr. Jeff, always so bad at strategy. If you’re going to try to escape Mary’s clutches, you don’t announce it. You just leave town the minute she walks out the door. You can set her condo on fire on your way out if it would make you feel better.

Ha ha, Rex is grinding something! Get it, because … ha ha … grinding … oh, what’s the use.

Based on Sarah’s weird, distorted face in the final panel, I’m guessing the wind is so strong and the boats are tilting because they’ve accidentally wandered into a nuclear weapons test site. Soon everyone will be killed in a ball of flame, which will at least alleviate the boredom of watching a sailboat race.