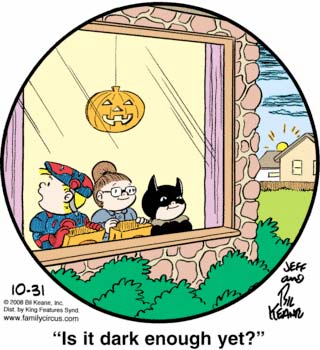 Yes, Dolly is dressed as … exactly who you think she’s dressed as. At least Jeffy isn’t going as Obama, in blackface.

Meanwhile, it took me took some serious staring and contemplation to realize that Billy is supposed to be the popular Iron Man character, with his mask pushed up on top of his head (presumably so we’d know that he was really Billy, and not Robert Downey, Jr., come to score some dope from the Keane Kids). For the longest time I thought that he was wearing a Kangol hat, and he was supposed to be some guy in a Kangol hat who’s been splattered by red paint. 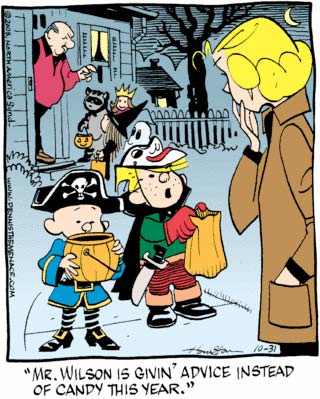 No amount of contemplation could help me suss out the meaning of Dennis’s outfit, however. Is he supposed to be the guy from V for Vendetta? Or just some dude in a mask who likes to stab people?

As I promised yesterday, the Spider-Man strip is simply relentless in its efforts to disappoint fans of Spider-Man, superhero comics, action, and narrative. Big Time, having managed to miss the web-slinger at point blank range despite paralyzing him with his most powerful weapon — sound — now simply bludgeons our hero with a clock.

Frank is quickly showing himself to be a very promising Mary Worth guest star. I look forward to him turning every compliment into something negative. “Frank, your daughter’s performance was simply tremendous!” “Yes, tremendously humiliating!” “Frank, this soup is delicious!” “Yes, deliciously repulsive!”

“Heh heh, some junkie I’ve never met gets popped, and that just makes for more action for Gary! Good thing I wore my sexiest camel-hair jacket!”

UPDATE: I’m going out of town for the weekend, so I probably won’t have a chance to post weekend comments until Monday. Till then, enjoy!