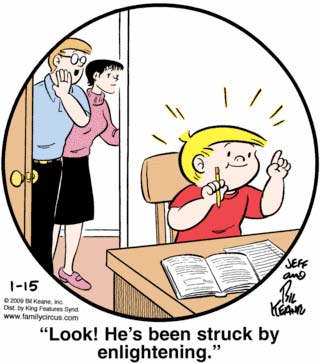 I don’t have kids, so I have to turn to pop culture to find out what the quiet little moments of parenting are like. So, a question for you out there who have successfully reproduced: do you like to stand in the doorway of your kid’s room while he’s doing his homework, staring at him for hours while he pores over his multiplication tables or whatever, as you desperately try to will the knowledge into his brain, hoping against hope and all evidence thus far that he isn’t a drooling submoron but actually a vaguely competent person who will be able to earn enough to support you in your old age? And all the while, he’s sitting there, looking at his workbook but not really reading it, thinking, “Really? Are they just going to stand there, looking at me, until I finish this? Don’t they have hobbies? Don’t they have somewhere to be? How on earth am I supposed to concentrate? Maybe if I do some cheesy silent-movie ‘I’ve got an idea!’ move, they’ll go downstairs and watch TV!'” Because if that’s the case, that … that seems kind of creepy, is all.

Ha ha, you see, it’s funny, because it wouldn’t make any sense for them to sing about a boat, because they’re in the middle of the desert … er … or maybe they’re on the beach … next to the ocean … where, um, a cow’s skull is floating…

OK, that’s the last straw. This, combined with this, has left me determined to get to the bottom of this coloring nonsense. Who colors this stuff? Do they not speak English? Do they hate their jobs, and/or the comics? I know you comics industry people lurk out there, so: do you draw a comic that gets colorized, or work for a newspaper or syndicate or something where coloring occurs? Write to me! I shall present my findings for the world’s edification! 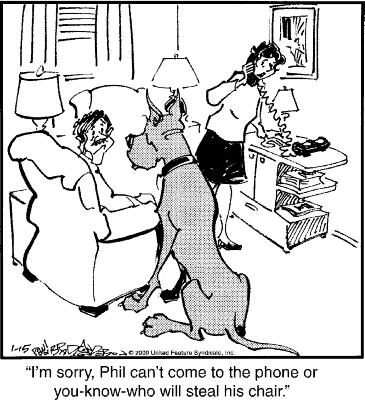 Things are getting pretty bad over at the Marmaduke’s Ownerses. Mr. Owner can only sit rooted to the spot in terror, knowing that the moment he moves he’ll be torn to pieces by his man-killing dog. His wife, meanwhile, can’t even bring herself to say the word “Marmaduke,” terrified that she’ll attract his attention — and his ravenous appetite — if she does.

“I think Ken is in the lumber business, but she doesn’t talk about him! But I do often hear her talk about a man named ‘Buck,’ and she always seems very happy when she brings him up. I hate to cast aspersions on her, but maybe she’s having an affair with this ‘Buck’ fellow! Oh, also, did I mention she’s fucking a deer?”

Seriously, Mark Trail, I was going to lay off on the bestiality jokes, but if this is how you want to play, I say BRING IT.

Cherry and Mark, meanwhile, have marital problems of their own. Mark actually admitted to noticing Cherry’s different hair, so Cherry is pushing her luck by wearing her sexy electric blue western wear. This can only end in tears.

“Also, while Olivia and I were playing doctor, she got pregnant!”

(Seriously, I always thought Skyler was a little old to be playing house. I guess it’s hard to establish the ages of your characters when they’re mostly mouthpieces for wry jokes written by and for grownups, and also when they’re birds.)

Oh, and: all your votes did not go for naught! For I am your 2008 Weblog Awards Best Humor Blog winner! Here, here’s an enormous graphic announcing my victory: 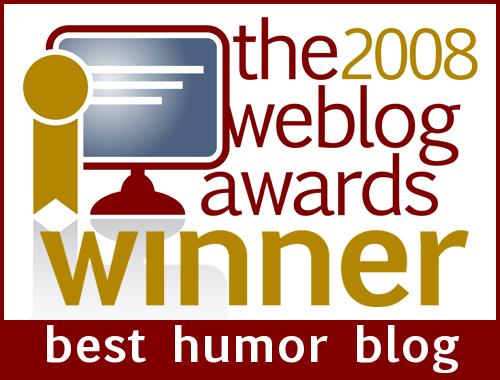 I promise I will not harass you to vote for me again! Unless I get nominated for something else. THEN ALL BETS ARE OFF.