For reasons that I cannot explain, terrible hillbilly stereotype Snuffy Smith and his kin have been popping up more frequently than usual here of late. Thus, I suppose it’s appropriate to preface this week’s COTW with a couple of interesting bits of Snuffiana from readers. First up is the title sequence from the (hopefully short-lived) Snuffy Smith animated cartoon, in which the title character lets loose a series of squawks that will haunt your dreams:

When you hear “Aw Aw AWWW” in your head over and over again for the next six to eight weeks, you can thank faithful reader Muffaroo.

Since surely that’s only whetted your appetite for all things Snuffy, I now present to you, thanks to faithful reader Jeff and the good folks at Archive.org, the first Snuffy Smith full-length film, 1942’s Private Snuffy Smith, in which our hero joins the army to defeat the forces of Fascism and make the world safe for democracy escape the revenuers.

Even the comely she-rustic in the first scene couldn’t get me through more than five minutes of this, but perhaps you’ll have more stamina. Sadly, Archive.org has not archived this film’s sequel, the awesomely titled Hillbilly Blitzkrieg.

Also, in non-Snuffy Smith news, faithful reader Proco was kind enough to send some scans from The Comics: An Illustrated History of Comic Strip Art, a 1974 book he picked up at a used book sale. Please enjoy this 1959 strip, in which Mary Worth smugly enjoys the debasement of her defeated enemy Connie, only to stiffen in shock when the woman tries to touch her. 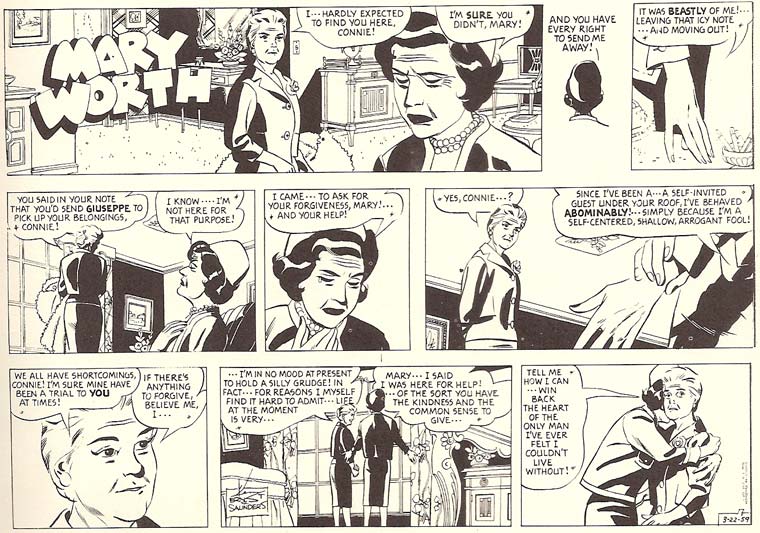 And, finally, remember that you still have a few more hours to vote in the 2008 Weblog Awards! Don’t forget to vote for me for Best Humor Blog, Medium Large for Best Comic Strip, and the The Bilerco Project for LGBT blog.

And now, with all that out of the way: the COMMENT OF THE WEEK!

“Do you think Mark even knows that he’s married? Maybe he’s holding out hope that Cherry, like most of the other visitors in his home, will eventually regain her strength and find her way back to her natural habitat. That look in the last panel seems to say ‘Oh, no! That one’s still here! And her scent is beginning to attract others of her species.'” –One-Eyed Wolfdog

And the runners up:

“So the moral of this years Curtis Kwanzaa fable is ‘if you don’t want to vomit three-eyed frogs, be sure to feed cheese to the tree stump.’ It’s like Aesop, if he’d suffered a catastrophic head wound and developed aphasia.” –fillmoreeast

“A chair with a purse perched atop it screams ‘Bachelor’ to Margo? That may explain why she’s still unmarried. And I don’t mean because furniture shouts at her, although that’s also not a bad explanation for a lot of things about Margo.” –DaveyK

“At least today’s The Phantom shows us how to aggressively hold a flashlight at someone/thing.” –kelsey

“Oh, Harry. These kids are in Funky Winkerbean. They know they’re not invulnerable to anything.” –Just Me

“Man, that Frank Griffin sure doesn’t give a lot, does he? The absolute farthest he is willing to go is ‘I didn’t want Greg to die.’ ‘Don’t be ridiculous, Lynn. I didn’t necessarily specifically wish for your only friend to die horribly per se. I would have been perfectly content to see him, say, imprisoned or shot into space.'” –Violet

“I do have to applaud Moy for making Frank such a cartoonishly horrible person that we cheer for Mary and her meddling, life-wrecking ways. That’s art, man.” –Zaq

“Sam Driver, the Deepak Chopra of total emotional insensitivity, is giving us a master class in numbness right there in panel 3. ‘Yeah, yeah … face, knife … uh-huh … sounds rough … Say, is there a Jamba Juice around here?'” –Joe Blevins

“Say what you will about Judge Parker, but the artist has perfectly captured every detail of an attractive-looking Scottsdale condo building. Does the tourist board know about this? Nice digs, hot policewomen, Sam Driver leaving town…” –BigTed

“I still think Patty has pubic lice. And if she thinks Mark and Cherry will be any help, she’s crazy. They are both hairless below the neckline, and their blood is pale green and fatal to inverts. That’s why Mark never has to worry about ticks.” –Poteet

“If that box contains a Tiffany engagement ring, it’s the biggest one known to man. Hopefully Eric will hire a sherpa to accompany Margo everywhere and support her bejeweled hand.” –left of the pyle

“Tess’s geometric earlobes match her planar mono-tooth. If I weren’t a real person, I’d totally date her. She’s the most perfect creature ever to escape from 2-dimensional Euclidean space.” –Squid Vicious

“I don’t follow Mark Trail except when it’s posted here, so I may have missed something, but what the hell happened to that kid who looked like Howdy Doody: The Dark Side? Rusty, I think his name was. Did he just wander off into the woods and die? Did Andy eat him? Did our hero chalk it up to natural selection because the kid’s hair wasn’t glossy and rigid enough for the standards of the Lost Forest?” –Calvinball Forever!

“I’ve recently noticed that Curtis’s dad ends all his responses with the word ‘hoot’. It makes me inexplicably angry. LOL.” –Ginger Yellow

“Even more lovable than the baby blue smocks is the featureless subway car and the utterly blank station sign. It’s as if to say, ‘Downtown 4 Express Train to Nowhere, Nowhere At All. Much like all of your careers. And your acrid marriage, Leroy.'” –teddytoad

“I think Lois’ meeting is with the local community theater group … judging from her hat, she’s playing the role of ‘Nipple #2.'” –thehollis

If you have voted with tip jar cash, I thank and salute you! And great balls of fire, our advertisers are bodacious: