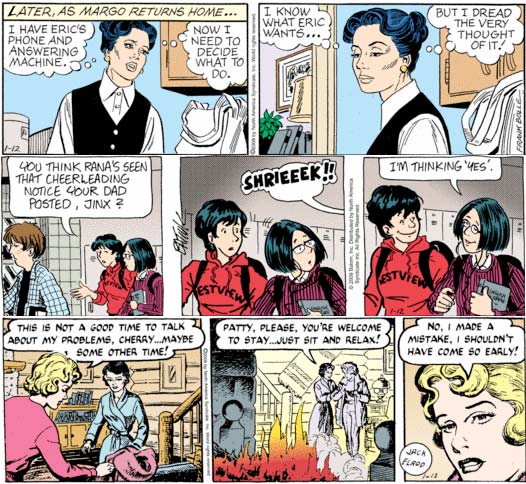 Not one but three continuity strips greet the new week with shocking plot twists, which, in the world of continuity strips, just means “dragging out the current plot lines in the hopes that you might complain if the newspaper decides to replace said continuity strip with Brewster Rockit.” We begin with Margo, who last we saw was snooping happily around Eric’s well-appointed apartment, finding what appeared to be her own engagement ring (and showing admirably un-Margo-like restraint in not tearing it open and proposing to herself on the spot). Then she noticed a message on Eric’s answering machine, decided to listen to it, and … what? What recorded message could have shaken Margo to her very core, leading her to physically remove the machine from the premises, presumably as a prelude to encasing it in concrete and dropping it into the ocean? Did Alan leave a detailed message explaining the profit-sharing on their dope-dealing scheme? Does Eric have significant overdue fines from Blockbuster for an embarrassing series of romantic comedies (including but not limited to The Lakehouse and Kate and Leopold)? Was it a call asking if he wanted his subscription to Hot Girls Who Never, Ever Wear Vests Magazine renewed? WHAT?

Funky Winkerbean perhaps isn’t supposed to be mysterious; maybe we’re supposed to be familiar enough with Rana’s personality to understand why she would find a “cheerleading notice” to be shrieeekworthy, and whether that would be a good shrieeek or a bad shrieeek. Of course, that would require more than maybe five post-time-jump strips to have focused on her, which hasn’t been the case, so: confusion. And Patty’s sudden urge to flee the Trail compound is confusing in that run-of-the-mill why-do-the-humans-in-Mark-Trail-act-like-this sense. “I thought that five in the morning would be the perfect time to have a woman-to-woman talk, Cherry! Usually at that time my husband is out in the woods, with the animals … oh, I’ve already said too much.”

Ah, the too-busy suburban couple, failing to savor a too-brief moment of contact before heading out to their separate lives. By “icebergs” Hi no doubt means “the genitals of your fellow realtors, at least one of whom apparently has a thing for Phrygian caps.”

“Haw haw, I knew that’d get a good tongue-wagglin’ laugh out of y’all, considerin’ our illit’racy! Now let’s commence with the book-burnin’.”