So, here’s the thing: I got laid off from my last office job nearly nine years ago, started doing freelance editorial work to earn money until I got a new job, realized I could make a living doing freelance editorial work, and have worked at home ever since. This has dovetailed nicely with two key aspects of my personality, namely that I am (a) kind of a misanthropic shut-in and (b) kind of a slob. Why on earth would I want to earn money by shaving and showering and leaving the house, when I’d just have to interact with other humans when I got there? My wife pointed out a newspaper article to me recently about these nice people in Baltimore, who look like they have a great, fun community for freelancers that encourages collaboration and innovation and you would have force me at gunpoint to start going there to work.

But one thing I do have is some nice ties, and some fun shirts that I like and that would totally work as business casual when the weather’s nice. And yet I never get to wear the ties, except at weddings (and virtually all of our friends are married off now) and I don’t wear the shirts often enough, because, you know, if I’m just going to sit in my home office, wouldn’t it more appropriate to wear pajama pants and a ratty t-shirt I got from a trade show ten years ago?

This is just a roundabout way of saying that I kind of relate to Bridget and Norm here. If, by some catastrophe, I had to start leaving the house to earn my keep, the one thing that would stave off utter despair would be the idea of getting to wear some nice clothes once in a while. And even that would only last for a year, tops.

We’ve been denied the joys of a Chaterstone Pool Party the last several times Mary Worth plots have shifted gears, but at least we’ll get to spend the next who knows how long enjoying that terrific MW mainstay: The Incredibly Awkward Dinner! Nation’s Geography Magazine sounds like it’s an attempt to almost but not quite earn an angry lawsuit from the National Geographic Society, but I prefer to believe that it’s a more edgy publication that presents the sort of stories that the fuddy-duddies over at National Geographic would be too scared to run. “That’s right, Mary — I’ve seen some things you wouldn’t believe! I spent nine months with the Shining Path in the Peruvian jungle, where we lived in the ruins of Incan cities and tortured class enemies for their crimes against the proletariat. As for the year I spent in Bucharest with those child prostitutes — well, let’s just say I did some things I’m not proud of, but my editors understood my commitment to total immersion journalism.” Dr. Jeff, disgruntled that someone else is attempting to be the center of conversation, clumsily interrupts by boasting of his time in Southeast Asia; presumably Ted will respond with a charming series of anecdotes about burned villages and necklaces made of human ears.

Rex spent most of Sunday insisting that June avoid the ship’s tap water due to the Norwalk outbreak raging onboard; apparently, though, the rest of the passengers are to be kept in the dark about this, which is probably OK as none of them are drinking water anyway. Still, I look forward to future installments in which Rex makes sure that his family gets first dibs on medicine and lifeboat space.

I’m no expert on the Spider-Man mythos, but my understanding is that when Aunt May is in trouble and wondering where Peter is as in panel three, he’s usually off fighting crime in his superhero persona, and not transparently using a disaster as an opportunity to get laid.

“There will only be one Judge Parker, dad! Because now, in accordance with ancient judicial tradition, I must ritually bludgeon you to death with your gavel, and then marry my own stepmother. Thanks for picking a second wife who’s more or less my age!” 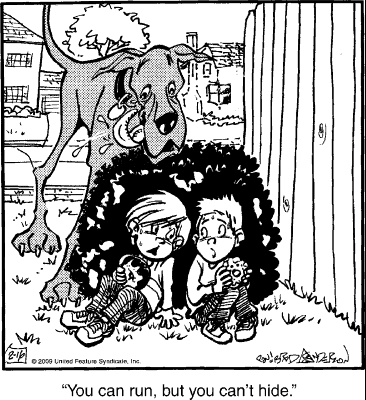 You know, sometimes I think I’m done with “Marmaduke is a terrifying flesh-eating monster” jokes. But then I see panels like this.