“Hey, Josh,” you’re probably wondering, “How did the winter Gil Thorp story finally play out?” Well, Gil managed to convince the Larkins (who are black) that it would be racist to move back to New York City to take a lucrative job that would help Mr. Larkin get his career back on track, and take the family away from the awful town where the kids are dating juvenile delinquents! Brenda Larkin marked the permanence of her presence in Loserville, USA, by blowing a key shot in the big game, thus keeping the Lady Mudlarks out of the playdowns, again. (The boys’ team’s fate wasn’t even discussed, so presumably they weren’t even in contention.) Then a career criminal, Ted Ex Machina, confessed to the convenience store hold-up that put all this in motion. And today, the one bit of whimsy and joy this plotline has given us — the fact that Ashley got robbed of a case of Nutboys (“It’s Nutty!”) — has been retroactively erased in Orwellian fashion. THEY WERE NUTBOYS, DO YOU HEAR ME? NOT ZAGNUTS! NUTBOYS! Now, for the love of all that’s vaguely wacky, let’s move on to baseball season.

In the final panel, we have confirmed what we’ve known all along: that Milford is a sort of Jerusalem for everyone who’s given up on doing anything with their lives. 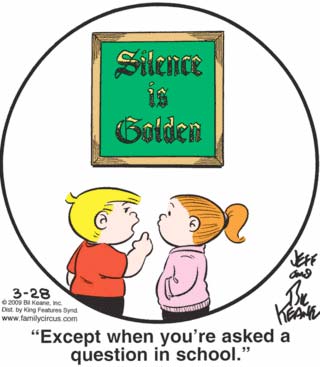 I’m not sure what’s sadder: that the Keanes view representational art as sacrilegious, and thus only decorate their otherwise blank walls with exuberance-restricting commands in terrifying blackletter font, or that said commands are so routinely disobeyed in the Keane Kompound, which is best known for the sounds of morons shrieking malapropisms.

“You’ll be making crepes for me. While I wait in bed. Your bed. Which is where I’ll sleep, after I’ve captured and subdued you with my muscular, prehensile head-tail. Even now, it’s curling and uncurling at the tip, in eager anticipation of the moment when it will strike and wrap around you with its anaconda-like strength.”

“Aunt Carol thinks that being a child of divorce, like pretty much half of everybody in America today, and having a father with a lucrative medical career is the equivalent of growing up in a squalid refugee camp in the middle of a war zone! Aunt Carol has absolutely no God-damned sense of proportion.”