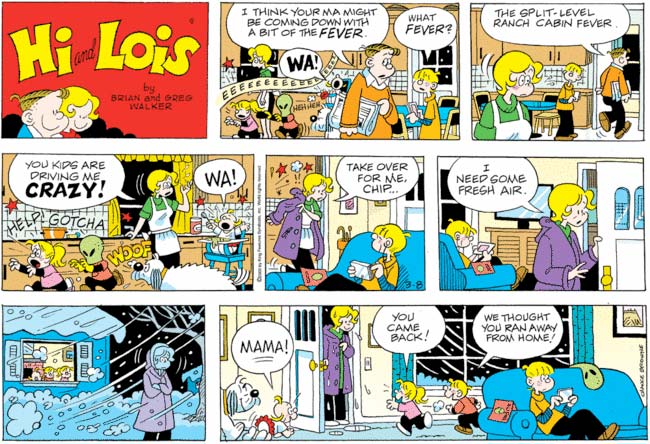 My goodness, today’s Hi and Lois presents one of the most searing indictments of standard-issue suburban heteronormality that I’ve ever seen — it certainly strikes me as more compelling than Revolutionary Road, which, I should confess, I didn’t see, because it looked pretty snoresville. Side note: I think Revolutionary Road should have been marketed as a Titanic sequel, and framed as a dream sequence going through Leo DiCaprio’s character’s mind as he froze to death in the North Atlantic, imagining what his life would be like if he survived and married Kate Winslet’s character. The numb, soul-crushing lifestyle he envisions for their future would really just reflect the fact that his body and mind are shutting down in the icy waters.

Wait, where was I? Oh, right, Hi and Lois. Lois, driven completely bonkers by her unruly brood, contemplates just leaving, just walking out, getting some “fresh air” and not coming back. Her wide-eyed look in the next-to-last panel is particularly harrowing: she’s just staring off to space, thinking, “What if I just keep standing here? They say that freezing to death is just like falling asleep. You don’t even feel anything. Wouldn’t that be nice? Wouldn’t it be nice to fall asleep in the nice white fluffy snow, forever?” Eventually, she decides that venturing into her hell-house is marginally better than dying of frostbite, so she turns around and returns, a wan little smile on her face.

The first two throwaway panels add an extra little bit of awful to the whole affair. “Woah,” Hi says, “Your mother sure looks like she’s about at her breaking point! I’m just going to take this newspaper with me to the bathroom and not come out again for the rest of the night.” At least Chip doesn’t actively flee when asked to help, though I note that he “took over” without once getting off the couch or even looking up from the tiny little screen on his cell phone. 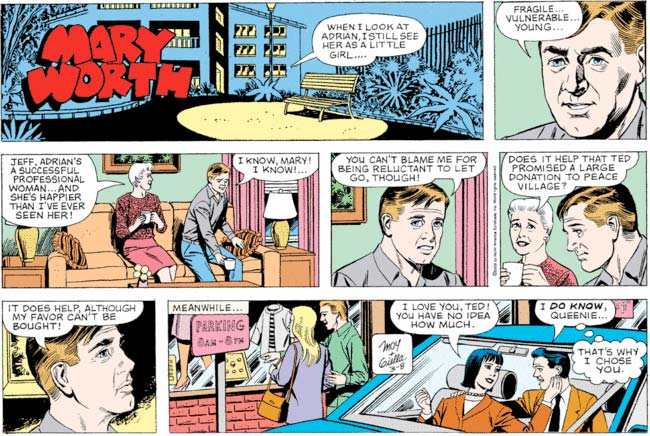 On that note, I should mention that Mary Worth appears to be setting itself up to compete with the recently completed “sometimes we slap and terrify our partners because we love them too much” Mark Trail storyline in the repressive patriarchy department. Adrian may be a full-grown adult and a doctor to boot, but we’ll soon learn what happens when a fragile, vulnerable, young little girl attempts to choose her own husband: betrayal and grifting and heartbreak and despair. Once Ted has left town with her life savings, Adrian will finally agree to the plan her father has been pushing all along: an arranged marriage with the son of Dr. Jeff’s neighbors, so that their children will eventually inherit both estates and achieve a higher status in the ranks of the local landed gentry. 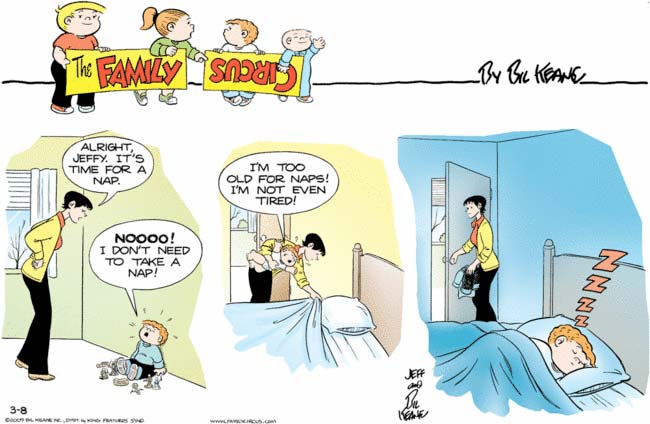 Ah, NyQuil — is there any problem you can’t solve?

There’s nothing Mr. Wilson longs for more than to pound back a few bourbons, get in his car, and slam himself into a tree.

Ha ha! It’s funny because Crankshaft is old, and all his friends are dying!