I suppose this strip is supposed to be interesting because it contains one of Dr. Jeff’s occasional and doomed attempts to become a Man Of Action, but to be honest I’m much more interested in his trademark green jacket. Presumably he bought it years ago from a Masters Tournament winner in desperate need of cash (John Daly?), and now wears it at all formal events to show his contempt for bourgeois notions that clothes should be “attractive to look at” or “match.” Still, look at the way he’s carrying it around Mary’s apartment at arm’s length. It’s almost as if he finds wearing it any longer to be an exhausting prospect, but its totemic power is such that he’s afraid to set it down or turn his back on it. He particularly needs to be wary of laying it on Mary’s mustard-colored sofa, because the resulting color clash could rip a hole in the fabric of space-time itself.

(UPDATE: As faithful reader willethompson pointed out, John Daly never won the Masters; I blame confusingly worded Wikipedia infoboxes. For a non-golf-fan, the appeal of a cheap “drunk and desperate John Daly” joke was too strong to resist.)

These three panels of Archie contain all the power of a Greek tragedy. A blind (or, in this case, bespectacled) sage notes the rot that is destroying his culture from the inside out, but is powerless to do anything but comment. Then, like poor doomed Pentheus, he is torn to bits by a mob of crazed women. 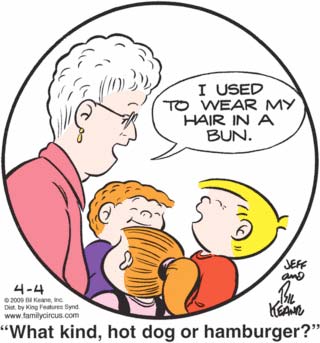 Normally, when the Keane Kids mangle the English language and/or basic common sense to make one of the subpuns or moronic bits of wordplay that are this beloved feature’s stock in trade, they just stare ahead with blank, dumb expressions while doing so, as the gags’ accidental nature is supposedly part of their charm. In this panel, though, Billy and Jeffy seem to be amused by the former’s wisecrack. This could herald a dangerous new phase, in which the melonheads, having somehow become aware of the fact that they are being cut out of the newspaper and hung on the refrigerators of nice old ladies everywhere, ramp up their cloying cuteness to unbearable levels. On the other hand, it’s possible that they’re just amused by the prospect of eating their grandmother’s head.

One of this strip’s most common running gags involves Curtis asking his father for a cell phone, and his father informing him that cell phones are too expensive. Thus, I must conclude that the strip’s creator has no idea what text messages are. Perhaps he thinks they somehow involve a tennis racket.