HEY EVERYONE JUNE MORGAN IS IN HER BIKINI! HOT! HUBBA HUBBA WOO HOO OK, look. Doubt my credentials as a heterosexual comic-loving man if you must, but I simply cannot get myself worked up over drawings of sexy ladies. I mean, sexy ladies are intriguing to me as a rule, but when it comes to cartoons, it’s hard for me to forget that someone, somewhere, generally a dude, was drawing said sexy lady, and usually thinking, “Hmm, I’ve seen sexy ladies in real life, but with the powers of my artistry, I can add even more sexiness!” Which in practice usually means “I can make her boobs even bigger!”

I don’t pretend to be consistent on this point. For instance, it’s well known that I have certain … feelings for Margo Magee. And Margo is nice enough to look at, but my feelings are primarily driven by the fact that she’s a hilarious, tightly-wound bag of angry crazy, which is the sort of thing I’ve been known to go for in the past. And while Margo’s wonderfully antisocial personality is as much a fictional construct as, say, Abbey Spencer’s ass crack, somehow it’s much harder for me to ignore the artifice involved in the construction of the latter.

And speaking of artifice … I’m not a professional breastologist or anything, but I’m pretty sure that one’s cleavage does not consist of two perfect and slightly separated semi-circles if one’s bosom is the one that God gave you. Having a surgically enhanced cartoon fantasy object strikes me as particularly bizarre and off-putting, to be sure, but what I really want to know is: whose work are we looking at here? Certainly not Rex’s; breast-enhancement surgery can take hours, and that’s much longer than he’d ever want to spend touching a girl’s boobies.

Blondie comments on the current economic crisis: the unemployed masses, their lives destroyed by the decisions of the powerful, weep openly in the street, just outside the fine restaurants where the captains of industry who got us into this mess dine on gourmet foods, served on china plates and fine tablecloths. The workers who are still employed sit by uncomfortably, afraid to protest at the injustice for fear of joining the starving hysterics in the gutter, wracked with shame over their collaboration in their own oppression. 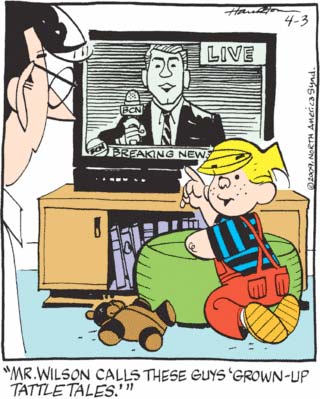 Hey, Mr. Wilson, it’s the government that publicizes the names and addresses of sex offenders, not the television stations. But I admit that when they ran that picture of your house with the caption “PERVERTS IN YOUR NEIGHBORHOOD” as the lead story on the 6 o’clock news, that was a little much. 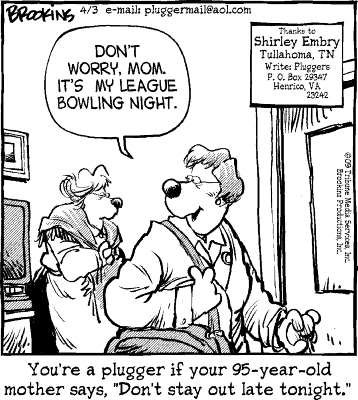 You’re a plugger if you euphemistically refer to an anonymous sex party as “league bowling.” (The rest of us call it “book club.”)