Always working on self-improvement, Mary has managed to upgrade the contents of her thought balloons from simple text-based information to a full multimedia experience. I was going to say that she really needs a hobby, but then I realized that figuring out better ways to obsess over other people’s problems so as to help her forget her otherwise empty life is her hobby.

Does anyone else remember how, years ago, Greg Evans had his readers vote on whether Luann was going to go to some dance with either Gunther or Aaron Hill? I seem to recall that either Aaron won the vote, or Gunther won the vote but then Luann went with Aaron to the dance anyway. My point is that in panel three Gunther is right: he is unloved either by the majority of the people who read about his life or by his creator. 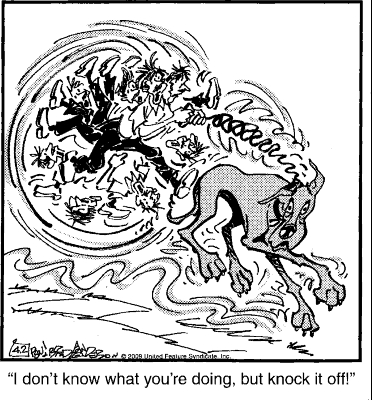 It’s natural that Marmaduke’s owner is confused. For most of us, being transported by our demonic pet through a mystical portal into some kind of hell-dimension of eternal torment would be an unfamiliar experience, and we wouldn’t have any idea what was happening until too late.

It’s been a painful experience for Marvin’s grandparents to have lost all their money and move due to financial necessity in with their daughter and her family; the worst part is that they have to live with Marvin, obviously. But still, multigenerational homes are traditional in much of the world, and there’s opportunities for real wisdom to be passed on. For instance, today Marvin is learning that human vanity does not fade with age, but rather only becomes more ridiculous.

Ha ha, Spider-Man told a “not” joke! These were very popular twenty years ago or so.

“But first, we’ve got $500 to spend! That will sure buy a lot of khaki and neckerchiefs!”