Man, Moe and Joe Parker are really working overtime to prove that they are in fact the greatest comedy duo in the business today. They’re interrupted in the midst of ruminating business-wise on the complex reality of being cogs in the illegal wildlife meat supply chain when they spot a guy with a camera, causing them to burst out with possibly the most hilarious exclamation ever committed to newsprint: “HEY, IT’S THAT GUY WITH A CAMERA!” Sorry, Mark, it doesn’t matter if you switch up the camera you’re using — so long as you’re that guy, and you’ve got a camera you’re toting around with you, you’re that guy with a camera, and the Parker Brothers have your number.

Also, the Parkers are apparently so dumb that they can at any given time hold in their memory only the most recent incident of fisticuffs or near-fisticuffs that their family was involved in; otherwise they’d identify Mark not as “that guy with a camera” but rather “that guy we held back while we kicked that senator’s ass.” Of course, Mark didn’t have a camera back then, which is probably why they don’t recognize him.

Today’s Beetle Bailey demonstrates how tricky it can be to reconcile the rhythm necessary for snappy marital hate-repartee onto the need to have some visual variety in your comic strip. Obviously, if both panels in today’s strip took place in the doctor’s waiting room, we’d be denied that lovingly detailed and charming drawn depiction of the Halftracks’ car; but the chronology established by the scene shift creates a weird gap between Mrs. Halftrack’s cruel zingers. It’s possible that the General is still kind of stunned from learning that he needs major surgery, and so his wife is having to make her insults less and less subtle in order to get through to him:

Mary needs to learn that desperation is never attractive, as she uses her suddenly hulking shoulders to pin Bonnie to the spot. “Think about what I said! Talking can help! It can help me! FOR THE LOVE OF GOD, LET ME MEDDLE YOU! I NEED THIS.” 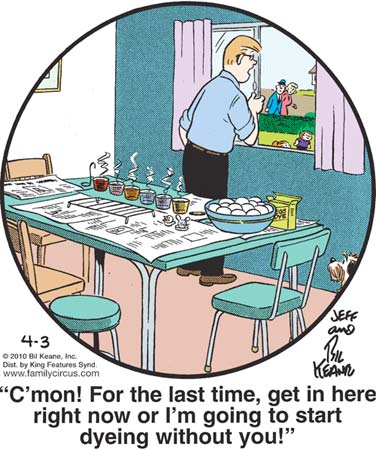 Big Daddy Keane has of course been “dyeing” inside, by degrees, for the past seven years or so. Billy’s supposed to be seven, right?

I’m reasonably sure that there were any number of incidents in Margo’s childhood that played out more or less like this.