Some quick one-panel entries from the Sunday funnies to begin your week! 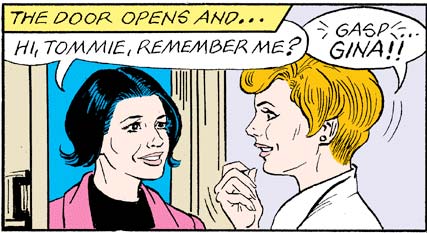 In classic A3G Sunday style, today’s strip rehashed the last week’s worth of story and then gave us exactly five additional seconds of action — in this case confirming my guess form yesterday that this returnee was Gina. I’m feeling more than a little validated by this, because I am a sad and pathetic little man! 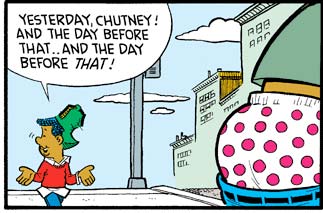 Today’s Curtis features the title character, who has been rockin’ exactly the same fly style since he first appeared on the comics page in 1988, offering a sneering discursis of the admittedly fairly goofy droopy-pants fashion epidemic that has been gripping America’s inner cities for the better part of the decade. Anyway, I just wanted to say that I found this throwaway panel, in which our hero was dwarfed by a boxer-shorted ass looming menacingly in the foreground, fairly delightful. 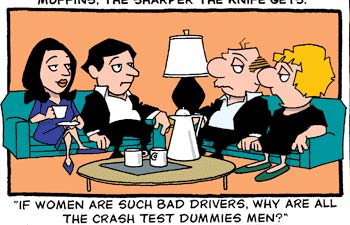 One of my favorite Lockhorns tropes is when the titular pair manages to lure some other poor couple over for some kind of no doubt hellish double date. These people never appear in the strip more than once, since presumably a single evening spent with the Leroy and Loretta’s psychodrama is more than sufficient for an entire human lifetime; by the time we actually see them in the strip, the poor victims are generally sitting on the couch staring numbly ahead, waiting for the horror to be over. Today, though, the female half of the non-Lockhorns couple seems intrigued by Loretta’s fiery feminist talk. “Right on, sister!” she says, with her barely perceptible smile. 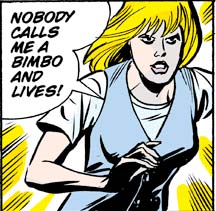 I know I’ve been terribly neglectful in following the Rex Morgan drama of late, right when it’s gotten vaguely interesting (no doubt a manifestation of my recurring Rex Morgan Problem). Still, I felt it was important to update you all on the following fact: nobody calls Brook a bimbo and lives. Have any of you been calling Brook a bimbo, in the comments here, or just to your friends and family members, or even in what you assumed was the safety of your minds? Better make your peace with your God now, my friends.