Archie takes a break today from typical teenage whimsy to explore Riverdale’s grim economics. Lazy layabout Jughead can’t maintain the income necessary to fund his burger habit; Archie, who is marginally more employable and may be writing himself checks from the checkbook stolen from Mr. Lodge’s desk, has agreed to float his friend enough cash to keep him fed, but at significant interest rates — and now those debts are coming due. Terrified at Archie’s suddenly revealed violent side (he’s holding a gun in his left hand in panel three, just out of our field of vision), Jughead seeks out “Pop,” his substitute father figure, coming up with some feeble excuse to try to beg for shelter and protection without Archie noticing. But we can see from his rage in panel two that, if Jughead can’t afford his greasy diner food, Pop wants nothing to do with him, and in panel three he shows that he wants no part of this scene. Jughead will be lucky to escape Archie’s implacable wrath with only a missing thumb or two.

(Seriously, though, if someone could explain to me what’s actually supposed to be happening here, I’d sure appreciate it.)

Speaking of sudden turns to grimness, I Dressed In The Dark is beginning to look less like What Not To Wear and more like a reality-show version of 24, with the sadistic Mama Kat taking the role of the chief torturer. The girls will submit to her aesthetic demands, no matter how many beatings she has to dish out. But the once bickering roommates will come together now that they’re literally under attack from outsiders; naturally, Margo has taken a leadership role, and she’s demonstrating exactly why, for all her faults, you want her on your side in times of trouble. I look forward to this battle of implacable wills!

You might think that Mark Trail owning a cell phone is terribly anachronistic for this strip. The police officer certainly does, based on his puzzled expression in the final panel (“Hey, my uniform indicates that I just arrived here from 1965, and this freak is talking into some tiny sci-fi gadget!”). Still, you have to admit that a mobile phone really allows Mark to ignore the feelings of the people around him, as is his wont. “Excuse me while I take this call … Hi, honey, what’s up? No, I’m not busy, there’s just some old lady here weeping about how they’re going to take away the only things that make her life worth living, some crap like that, I dunno.” Cherry’s glad to be able to get a hold of Mark now, but she’ll regret it when she realizes that with his new phone he doesn’t even have to return home from a romantic horseback ride to get a call from his editor Bill Ellis that will take him out of range of her clumsy seduction attempts. 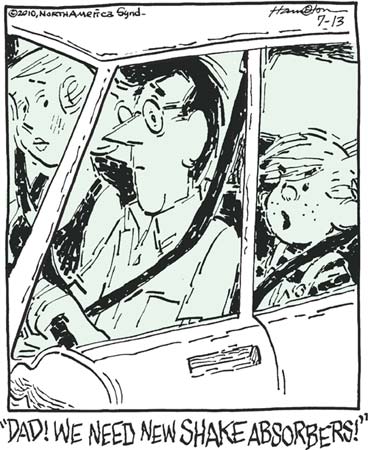 Dennis the Menace the character may no longer be menacing, but today’s Dennis the Menace the cartoon panel was apparently menacing to the colorists, who decided that trying to render the vibrating Mitchells in color using the Photoshop tools at their disposal wasn’t worth the effort. This in no way makes up for the fact that the whole “joke” here is that Dennis belched forth a punny malapropism. That’s the sort of thing that Jeffy Keane does, Dennis. Do you want to be like Jeffy Keane?

We interrupt our usual studied ignorance of Cathy to note that today’s “punchline” contains the phrase “poop bags.” We now return you to our usual refusal to acknowledge Cathy’s existence.