When Milford’s police chief says that pleasure isn’t the word he’d use, he must be referring to Gil’s pleasure, because, like a selfish lover, he appears to be deriving a great deal pleasure from this midday office encounter — smug, smug pleasure, as his little smile in panel two indicates. And why not? Every Gil Thorp plot in which one of Gil’s charges is accused of wrongdoing ends up with the poor Mudlark exonerated in completely unrealistic fashion; now we’ve got this season’s hero Cody Exner — the poor foster kid who tries so hard to be a good team captain — on video selling “dope” (which I assume in whatever decade Milford is in still refers to boring old marijuana rather than heroin or something awesome). Will Gil finally have to admit that his judgement was wrong? I mean, he shrugs off each year’s failure to win a championship with remarkable aplomb, so maybe he’ll just take the attitude that, eh, we pick two team captains every year, statistically one of them was going to be a drug dealer eventually.

Hey, Judge Emeritus Parker! Remember that $100,000 advance check you got? See, in the publishing industry they call it an “advance” because they’re paying you in advance for money your book hasn’t earned yet. So, you shouldn’t be getting those $850 royalty checks until your book or books have made $100,000 worth of royalty money for you, which, for a first-time author writing what I assume to be dull legal thrillers, should occur sometime around 2081. My best guess is that this check is actually money Sam found under the cushions of one of the lesser-used sofas in his vast mansion and he’s giving it to Judge Emeritus Parker in a (failed) attempt to get him to stop complaining. If it is a real royalty check and his book has miraculously already earned him a six-figure sum, whatever those initial promotional expenses cost couldn’t possibly be enough.

Mark Trail is the serial strip with the loosest grasp of how humans actually think, speak, and behave, so naturally it also puts the least effort into making the shift from one plotline to another seem even remotely naturalistic. “Mark, a man is waiting for you at the house! He will tell you what will happen next, to all of us!” 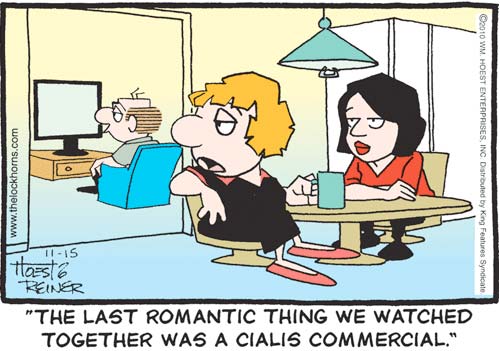 Wow, this, coming so soon after this, implies that the Lockhorns is moving tentatively towards the third rail of Lockhorns narrative: Leroy and Loretta’s sex life. By next April, each day’s panel will find them in the midst of some depraved sexual act. They will of course still sport expressions of heavy-lidded weltschmerz and will emotionally devastate each other with cutting remarks.

Comment of the week update! Guys, I’ve decided, for scheduling reasons of my own that are really far too boring to go into here, that I’m moving the COTW post from Monday to Friday. I’m going to skip a week this week, giving Black Drazon pride of place for another five days. ENJOY YOUR EXTRA TIME AT THE TOP, O NOBLE COMMENTOR!