In linguistic matters, I am a firm descriptivist rather than a prescriptivist. I believe that many grammatical rules waved about by pedants are poppycock based on Victorian-era grammarians who wanted to make English more like Latin. I also know that all languages slowly change in both grammar and vocabulary — if this weren’t so, we’d all be talking like Shakespeare, or we’d be able to read Beowulf in the original — and fighting against such change is pointless. Still, there are certain neologisms that set me off, and one of them is “quality” used as a synonym for “good.” My old roommate had this same reaction when people used “luck” to mean “good luck,” which I found hilariously overwrought, and I recognize that this is essentially the same linguistic phenomenon, and yet here I am, wanting to strangle Les, even more so than usual. I guess I just associate this use of “quality” with soulless corporate prose, and assumed that as an Important Writer Person Les would reject it with great smugness. I mean, there’s a gas station near where I live that has a huge sign that reads “QUALITY IS NOT AN OPTION — EXPECT IT,” which never fails to make me laugh, and I guess I’m discovering that my standards for Les are a little higher.

In other news, grad school-era Les was some kind of leering, sideburned megalomaniac, and it’s actually rather shocking that Ronnie bothered to seek him out.

Since I relentlessly slam on Crock for being unfunny and terribly drawn, I feel obliged to admit that today’s installment actually made me laugh. I kind of love everything about it, from Preppie’s horrified nose-wobbling to the ugly dog’s smug post-obscene-gesture smirk in the final panel. I’m always fascinated by the fact that taboo words or gestures that cannot be depicted in mass media can be described or otherwise conveyed such that the reader knows exactly what’s been censored, like when only the vowels of swear words are blanked out on the radio. Probably the strip would be wholly incapable of depicting a dog giving “the paw” in a way that makes any kind of visual sense, but today at least that weakness is turned into a strength.

I dearly hope that our hitherto unseen sexy home-wrecking publicist is at the door, mangled, broken, still wearing her hospital gown, and trailing an IV behind her; she’s come to aggressively mate with a married author, as stipulated in Cheatham House’s standard contract. It would also be funny if that knocking were actually being produced by a woodpecker — a giant, sexy woodpecker.

Berna, you don’t know the half of it! Look at those stitches across the top of his head — it looks like Dex finally got that brain surgery he always wanted!

“Also, describe in graphic detail how his chitinous exoskeleton will shatter the moment the needle hits it!” 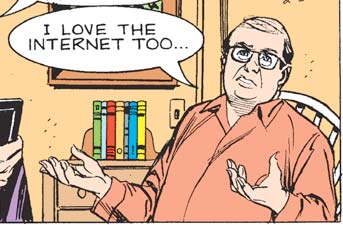 I used to love the Internet as well, but with this vision of Internet-apology swimming before me, all untrimmed fingernails and wobbly combed-over hair, I think I’ll destroy all electronic equipment in my house forever. Well played, Mary Worth!