Ahem. Let’s just enjoy that line again, shall we?

Oh, man. I mean really, it’s too delicious! “No paramedics, Scott!! They follow their rules — their medically sound rules, based on a century of science and years of training and experience dealing with people who need medical attention, not our crazy patchwork of imperious and contradictory commands and whims that we’ve developed over the course of a lifetime of wealth and privilege — wealth and privilege that have kept us isolated from anyone who might tell us that we’re wrong about anything, ever. Damn it, if I want this baby sucked out of me through my bellybutton by powerful magnets, then that’s how it’s going to be! Who do we know with a medical degree who’s weak-willed enough to do exactly what I tell them to, no matter how stupid that might be? Oh, right, Tommie Thompson. Call Tommie!”

Excuse me, be right back, getting that tattooed on my ass.

It actually makes me feel kind of bad for Mark Trail, because on most days his “Hmm, I’m being pursued by armed killers, let’s wake up this hibernating grizzly bear, that can only result in positive outcomes” plan would be the most deranged and hilarious thing on the comics page. But not today, my friend. Not today.

I’m not sure if this is the narrative intention or not, but I am 100% more interested in Mary’s upcoming stint as an Ask Wendy pinch hitter than I am in Dawn moping her way across Italy or whatever. Mary is finally beginning to realize that this newfangled “printing press” technology will allow her to meddle in lives on an unprecedented scale, forcing people to bend to her will without ever having to meet them in person! And the rest of the world is also rejoicing at the news, as the front page of the Santa Royale Gazette indicates: stock markets are going through the roof now that Mary will be dispensing advice in the newspaper, and I have no doubt that the “RESULTS ANNOUNCED IN NEW POLL” indicate unanimous support for Mary’s appointment as dictator for life.

Uh oh, looks like Avery’s about to fall to his death! I certainly hope that he’s had time in the car to write a new will that leaves his vast fortune to Sam. 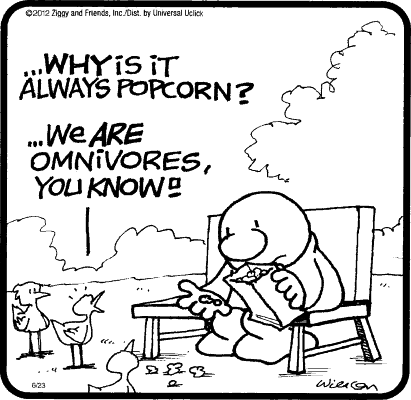 OK, so here’s a funny story! I was pretty much all ready to write a joke along the lines of “These birds yearn to feast on Ziggy’s flesh” and move on with my life, when something about that seemed naggingly familiar; sure enough, a little Google searching revealed this Ziggy cartoon from four years ago:

…and at the time I in fact made the exact joke I almost made about this panel. The weird part is that this isn’t just a repeat panel — it’s completely redrawn, which makes me wonder if, much like me and my birds-eating-Ziggy joke, Tom II thought of this joke again and forgot that it had already appeared in his strip and completely redrew a panel for it. That sort of problem is frankly forgivable and inevitable, for who can avoid repeating themselves when they need to produce seven jokes a week, every week, every year, for the rest of their lives?

Actually, I’m sorry, that wasn’t so much a “funny story” as a “depressing” one.