How hard has everyone instantly fallen in love with Ol’ Pop, the kindly patriarch of this nest of heavily armed thugs? Very hard, I’m guessing! I’m looking forward to the fun as he and Mark get to know each other. “How long have you been in this guerrilla band, Pop?” “We’re not a band of anything, son! Certainly not anything political like ‘guerrillas,’ which implies some sort of political or ideological goals. We’re just poor peasants trying to get rich by seizing Americans at gunpoint if they happen to sail too close to our village and then holding them for ransom! Now shut up and don’t touch anything in my hut or I’ll slit your throat.”

“Man, I sure wish Momma would cut it out with the gross Oedipal schtick and find another direction for its sexuality-themed jokes,” said all readers of the strip until they read today’s installment and then collapsed in gibbering horror. 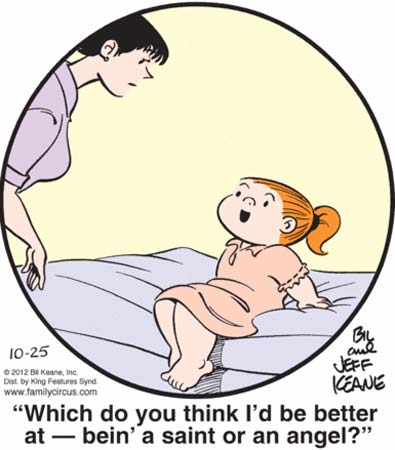 “I’m leaning towards angel, because to be a saint you have to be really, really good, but to be an angel you only have to be regular-level good and also dead.”

I may poke fun at the journalistic bona fides of J. Jonah Jameson, Peter Parker, and the Daily Bugle here, but you have to admit that they’re doing better than the people over at the Las Vegas Vista. “Holy crap, chief,” said the top political reporter, “There’s going to be a presidential election in just a few weeks! Let’s get a news story on today’s front page! I’ll do some research and have a feature on who exactly the candidates are for Sunday.”

“And I prefer to call it 180 pounds of confidence! Are you the one behind all those ‘Is Greg Cooper packing on the pounds’ items in Walter Scott’s Personality Parade? What the hell kind of publicist are you?”

Jeff’s mom has met a courtly gigolo, in what is probably the single most cheerful Funkyverse development in recent memory. 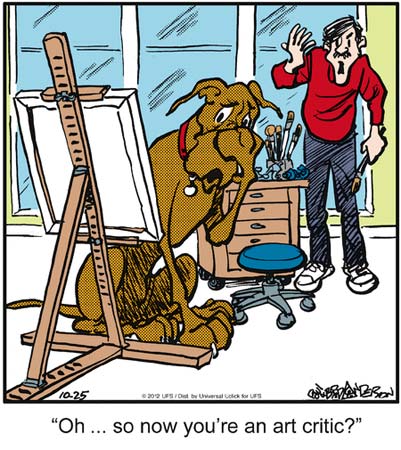 Do you know who else was a failed artist?