Sorry I haven’t been keeping you up to date on Mark Trail, in which a heavily armed Cherry resolved the whole Rusty-napping situation without Mark ever needing to show up! Given the level of real danger that was involved with Rusty being kidnapped by criminals and threatened with death, I’m a bit puzzled as to what “exaggeration” she thinks Rusty will resort to in recounting the story to Mark. “Mark, I saw these men killing sheep from a plane, and then they kidnapped me, and they were going to turn me into a sheep and then shoot me from a plane, so they taught me sheep language, but I summoned all the other sheep, who ate the men! Plus there were aliens!” 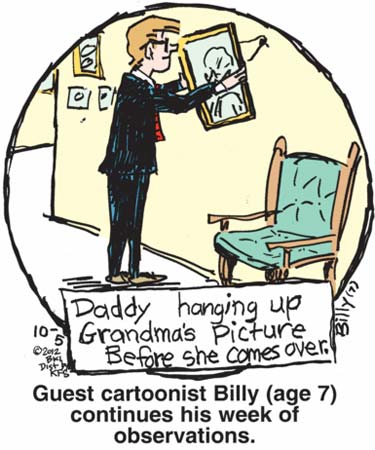 The Billy (age 7) Family Circuses are usually mostly interesting to me because of the layers of family-narrative artifice involved (Jeff Keane continuing his father’s tradition of pretending to draw as his brother), but today’s family psychodrama is much more straightforward: remember, if you don’t like your mother, your kids will notice.

Looks like all’s well that’s ended will in Spider-Man! And now you get to contemplate whether you’d rather make sex to a snake or a spider, yuck.

Ha ha, it’s funny because Shoe is emotionally dead, unable to feel either joy or pain!

Meanwhile, in Rex Morgan, the thingy came off and there’s water everywhere and June is pissed.