So, yes, as predicted, an innocent if somewhat ham-handed query about why the word “comic” usually means “funny” but doesn’t in the case of comic books has led to a week-long and increasingly self-important diatribe about the history of the medium and why it’s been forced unfairly into a ghetto where nobody takes it seriously, man (The question that was actually asked was answered fairy succinctly by webcomics hero David Willis.) Hat-bro has been allowed to occasionally say quasi-funny things this week making the point that, ha ha, this answer sure is going on for a while and is boring, but he’s now been silenced, and in today’s final panel the oppressive crush of verbiage manages to drain all color from the room as it reaches a critical mass.

Ha, so, Aunt Cathy, Evan’s mean girl aunt, is … running a publicity agency that competes with Margo’s? And Evan is secretly working for Margo’s agency as a mole? And he’s spiriting young starlets away to his aunt’s agency by convincing Margo that they’re rivals for his massage-y affections? This makes so much less sense than anything else I thought was happening, which is really something of an achievement.

Haha, I love Dawn’s wide-eyed expression in panel two, as she realizes she’s basically been given parental authorization to just stone cold make out with a bunch of dudes without having to worry about boring old “commitment” or anything. Of course, her new friend/love interest Jim is possessive and controlling, so I’m sure he’ll be thrilled to hear about her plans to play the field.

In world gone mad with ruthless and pointless competition, the Perfesser knows that the only winning move is not to play. That’s why he’s just going to sit in his overstuffed armchair with a beer, eating a pizza right out of the box, and staring at the TV with dead eyes until the reality show that is reality declares a “winner” he can get behind. Till then, he’s opting out of the whole thing. Where do you suppose the pizza box went between panels one and two? Do you think there are a bunch of other pizza boxes piled up there, wherever he threw it? 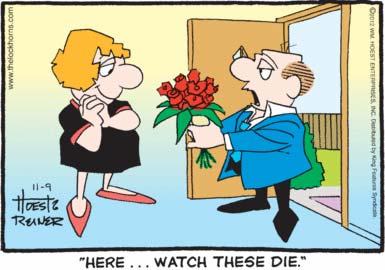