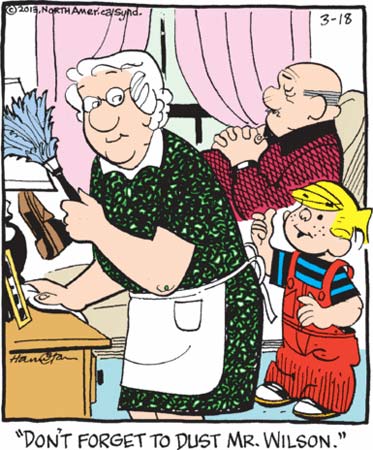 Oh, man, the knowing glances Dennis and Mrs. Wilson are exchanging here speak volumes. Mr. Wilson’s look of peaceful repose, hands crossed contentedly over his chest, can only mean one thing: he’s been dead for months, and Mrs. Wilson hasn’t told anyone so she can keep collecting those sweet Postal Service pension checks. Dennis found out, naturally, but just as naturally is happy to keep her secret, as long as Mrs. Wilson keeps the cookies coming. Preserving Mr. Wilson’s corpse through some no doubt ghastly home mortuary science was not strictly necessary for running the scam, of course; that’s just to allow Mrs. Wilson and Dennis to glory in their satisfaction at the old crank’s death.

Seeing as 90% of Curtis strips are variations on the same five or six jokes, I would not have picked it as the first newspaper comic to use the resignation of Pope Benedict as fodder for a punchline. Only five weeks after he quit, too! In the world of syndicated comic strips, that’s an amount of time that can only be detected with the most delicate of scientific instruments.

More haunting evidence of the terrible cataclysm that wiped out humankind and left Earth in the hands paws of sentient beasts: although New York survived more or less intact, elsewhere whole mountain ranges were submerged by massive flooding. Typically, these creatures may be wearing hats and sailing boats and thinking they’re the ones in charge, but they’re still very keen to dig up some of the valuable remnants of the far superior civilization produced by the late lamented Homo sapiens.

This camel is outraged that a bird wants to use his hump for sex. 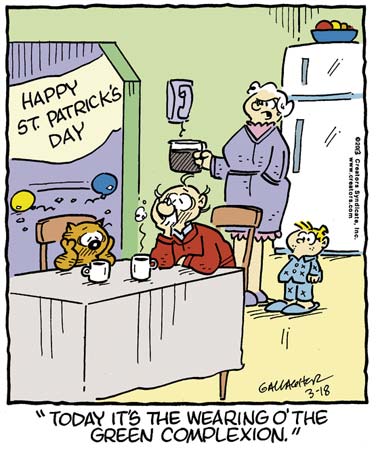 It’s nice to see that Heathcliff and his owner went through the trouble of putting up a festive banner in their living room, to create some holiday context for just staying home and getting bombed out of their skulls.